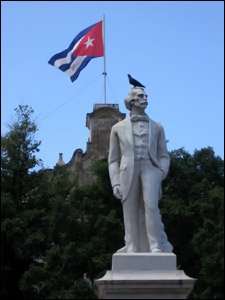 St. Kitts and Nevis Prime Minister Hon. Dr. Denzil L. Douglas was among Caribbean Heads of State and Government who paid tribute to Cuba’s National Hero Jose Marti at the Mausoleum that treasures his remains, in the Santa Ifigenia Cemetery, located in this eastern city.

Accompanied by Cuban President His Excellency Raul Castro, the CARICOM leaders laid a wreath at the site, on behalf of the Caribbean people, as the first activity of the 3rd Cuba-CARICOM Summit that opened Monday at the Santiago Hotel.

Raul Castro, accompanied by the Prime Minister of Antigua and Barbuda and pro-tempore Chairman of CARICOM, the Hon. Baldwin Spencer, to the niche treasuring the Cuban patriot’s remains, which rest over samples of earth dust from all nations of the Americas and surrounded by coats of arms of many Latin American countries.

Following the tribute, Prime Minister Douglas and his colleague heads of government and top officials of CARICOM, the Association of Caribbean States and the Organization of Eastern Caribbean States laid white roses at the tomb of the Cuban National Hero.

A report from Santiago said the tribute was brief, but intense and solemn in a site guarded by an eternal flame recalling the heroes and martyrs of Cuba’s Independence wars. Following the changing of the guard, participants listened to the Cuban National Anthem and a melody related to the poetry written by Jose Marti; President Raul Castro gave a brief explanation on the importance of the site for the Cuban people.

Later, the CARICOM heads of state and government took the official photo of the Summit, which opened Monday under the slogan Cooperation for Integration.

The Caribbean delegations also paid tribute to Independence Hero Antonio Maceo at the square named after him in Santiago de Cuba, on the occasion of the 112th anniversary of his death in combat.

The CARICOM leaders laid a wreath at the monument raised to the Major General Antonio Maceo and they were briefed by Cuban President Raul Castro on different aspects related to the battles waged by the Cuban patriot during the Cuban independence war against Spanish colonial rule.