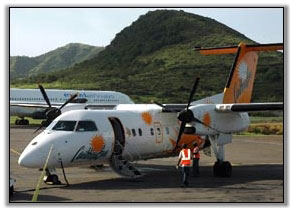 The airlines say the decisions aimed at further strengthening their respective competitive positions and designed to optimise costs in order to fast-track future growth, will take effect by January 2007.Flights between St. Kitts and San Juan and Tortola and San Juan will be discontinued and well informed sources said flights between San Juan and St. Thomas and St. Croix will also be terminated.

A statement issued in Florida said that between September 2006 and January 2007, leases on three Caribbean Sun Airlines Dash-8 100 series aircraft will not be renewed, reducing the carrier’s fleet to a total of four aircraft.  One Dash-8 will be removed from the operational fleet in September 2006, one in October 2006 and another in December 2006.  The removal of these three aircraft from the Caribbean Sun fleet is in addition to a previously announced fleet reduction of two Dash-8 100 series aircraft, which will take place in September 2006.

The airline said that to compensate for the loss of aircraft, Caribbean Sun will suspend service to/from St. Eustatius, discontinue flights between St. Kitts and San Juan, and reduce flight frequency to/from St. Maarten and to/from Tortola effective October 1, 2006.  In January, Caribbean Sun will discontinue service between Tortola and San Juan and reduce its flights along the San Juan to Antigua to Port-of-Spain route.

President and CEO of Caribbean Star and Caribbean Sun, Skip Barnette, commented on the changes, saying: “We’re taking a couple small steps backward to make it easier for us to take a giant leap forward in the future.  These are tough decisions, but we know that they’re the right ones because ultimately they will greatly benefit the traveling public throughout the Caribbean.  We’ve strengthened our operations, giving us a more solid foundation from which we can grow in concert with our regional competitors, instead of against them.”