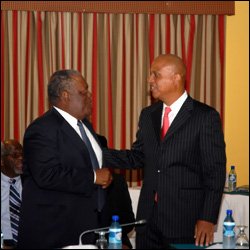 A draft Regional Information and Communications Technology Policy and Action Plan is to be presented for consideration at a meeting of Ministers responsible for ICT in May.

Caribbean leaders at the just concluded 12th Inter””Sessional in Belize also received a status report on the work of the CARICOM Commission on Youth Development (CCYD) and noted the progress made toward the implementation of its objectives as they had mandated and looked forward to the presentation of its final report at their Regular Meeting in July 2009.

They expressed their pleasure at the involvement of youth across the Region in a series of discussions and focus group meetings that generated invaluable information and insights into their perceptions, concerns and aspirations.

Heads of Government called for the fullest support of the CCYD by Member States and other stakeholders in the implementation of its work plan which would ensure a timely delivery of its Report and supported the recommendation for a special engagement of youth with Heads of Government.

Heads of Government accepted the need for Member States to re-examine the management and coordination of the various components of ICT4D at the national level and in this regard, agreed to establish national committees to guide and inform these reviews.

Heads of Government welcomed the notification of Belize and Dominica that they would seek to introduce the necessary legislative instruments to give effect to the appellate jurisdiction of the Caribbean Court of Justice.

Heads of Government reaffirmed the mandate given to the Secretary-General to coordinate EPA implementation among Member States and endorsed the establishment of the Unit to promote EPA Implementation and confirmed that the assistance of the Unit is available to all Caribbean Forum of African Caribbean and Pacific (ACP) States (CARIFORUM ) signatory to the EPA.

Heads of Government exchanged views with the Minister of Foreign Affairs of the Dominican Republic, who represented his President, on issues relating to the implementation of the EPA and on his country’s relations with the Caribbean Community.

Heads of Government also agreed that discussions with the Dominican Republic should be continued with a view to arriving at a consensus on the designation of the CARIFORUM Co-ordinator under the EPA.