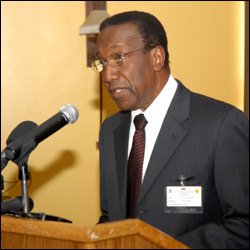 The border issues between Guyana and Venezuela and Belize and Guatemala were discussed in Belmopan by Caribbean Heads of Government during the just-concluded 12th Inter-Sessional.

According to the official communiquÃ©, Heads of Government received an update on the relations between Guyana and Venezuela and in particular the efforts between the two sides to identify a new Special Representative of the United Nations Secretary-General to advance the Good Offices Process. They underscored the need for that post to be filled at the earliest possible time.

Heads of Government reaffirmed their unequivocal support for the safeguarding of Guyana’s territorial integrity and sovereignty and its right to develop its resources in the entirety of its territory.

On the Belize-Guatemala border issue, Heads of Government received a report on the status of relations between Belize and Guatemala.

They expressed their satisfaction on the successful negotiation and signing of the Special Agreement by both Governments to refer the territorial dispute to the International Court of Justice for final settlement, subject to the approval of their citizens in national referenda.

In this context, Heads of Government called on the international community, particularly the “Group of Friends” to support and assist the process both politically and financially.

Heads of Government emphasised the need to continue funding the operations of the Office of the Organisation of American States located on the Adjacency Zone that has successfully supported the efforts of both governments in maintaining peace and security and in reducing tensions along the border communities in both countries.

Heads of Government reaffirmed their unequivocal support for the territorial integrity and sovereignty of Belize.