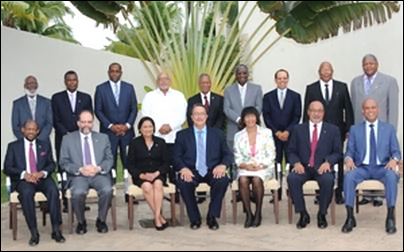 Caribbean leaders have received an update from the Secretary-General regarding the organizational reforms put in place or proposed for the CARICOM Secretariat with a view to enhancing its efficiency and effectiveness and following on the decisions taken at the Inter-Sessional Meeting.

According to the communiquÃ© issued at the just concluded 33rd Conference of Caribbean Heads of Government in St. Lucia, the leaders requested the Secretary-General to continue with the reform process and underscored the importance of a comprehensive communications strategy as an integral part of the reform, with a view to taking the Community to the people.

Heads of Government extended appreciation to the Government of the United Kingdom, through the Department for International Development (DFID), and to the European Union (EU) for their contribution to the reform process,” it said.

On the issue of foreign policy, Heads of Government engaged in an exchange of views on the profound geopolitical and Geo-economic changes taking place in the global environment and their implications for the Community’s external relations and its economic and developmental well-being.

They were of the view that these changes presented challenges but also provided opportunities which needed to be exploited to the benefit of the Community.

The Heads of Government agreed that the major focus for the Caribbean Community at this time must be on growth and development and considered the performance of CARICOM economies in the context of the global economic crisis and unstable recovery and of projections for the immediate future. Attention was given to developments in the financial market which have implications for the Region and for the economies which are major markets for CARICOM goods and services.

Conscious that global financial and economic developments were merely compounding problems already existing in the Region, Heads identified major factors that were integral to the difficulties being experienced and considered possible ways of addressing the high levels of unemployment which were also a threat to social stability.

Heads of Government determined that there was need to re-examine policy approaches to growth and development and agreed to review fiscal policy with a view to achieving a balance between taxation and expenditure to more adequately support economic growth and development. They recognized that the current situation required different and innovative thinking and action.

“They identified various sectors of the economy, including tourism, agriculture and construction, as economic sectors that offered prospects for early resuscitation of economic growth and reiterated their conviction that regional integration has all the possibilities for supporting competitive production and production integration and that particular attention needed to be given to Caribbean convergence in our development strategy. They agreed on the need to develop a Caribbean Investment Programme to support the efforts at stabilization and growth as well as competitive production,” said the communiquÃ©.

It added that Heads of Government called on the Caribbean Development Bank to so structure its lending products and processes to assist in the thrust for growth and development and signaled their intent to engage the multilateral financial institutions in the effort to buttress Member States against external shocks.

On the matter of the CSME, Heads of Government assessed the status of implementation of the CSME and considered the action required for consolidation of the gains realized. They recommitted to ensuring the achievement of the original objectives of the CSME, including free movement of skilled Community nationals, access to the Region’s resources and creating the environment for competitive production.

“They endorsed the agreements reached at the Meeting of the Prime Ministerial Sub-Committee on CSME on 3 July 2012 and emphasized the following elements, among others, for strategic focus for an effective CSME, the expansion of the categories of skilled Community nationals, including the introduction of additional categories; adherence by all Member States to the decisions that make CARICOM nationals welcome in other Member States.

The decisions include the automatic grant of a period of six months upon entering a Member State, subject to security exceptions; creating the environment for competitive production; making key institutions more effective; and acceptance of the principle that Member States able to proceed with integration at a faster rate should be allowed to do so, provided that the door is always left open for other Member States to join when they are able,” the communiquÃ© said.

With regard to the Single Economy, Heads agreed on specific elements of the Work Programme and Timetable for implementation in the short to medium term.

“Heads of Government received an update from the President of Suriname regarding the Establishment of Joint Economic Ventures. The President indicated that there had been discussions with the Governments of Trinidad and Tobago and Guyana as well as with regional and international institutions, in an effort to move the venture forward.

Heads of Government agreed that the Regional Task Force to examine the proposal in greater detail, comprising Suriname as the Chair, with Barbados, Guyana, Haiti, Jamaica, a representative of the Organization of Eastern Caribbean States (OECS), and Trinidad and Tobago as members, should begin its work as soon as possible,” the CARICOM communiquÃ© said.