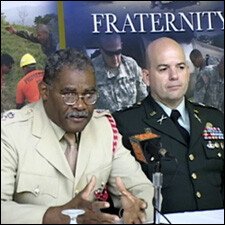 The Caribbean Region and Central America are better prepared to deal with natural or man made disasters, after successfully completing the latest round of training and evaluation under the Allied Forces Humanitarian Programme (FAHUM).

The annual exercise, which is typically held prior to the start of the hurricane season, saw disaster simulations being staged in Antigua, Grenada, Honduras and Costa Rica in this instance. The mobilization of emergency personnel and resources, and their use, were evaluated by representatives from the 25-country body who spent the past two days in St. Kitts for the After Action Review session.

Andria Grosvenor of the Caribbean Disaster Emergency Response Agency (CDERA) explained that the exercise in Grenada focused on the threat of a tsunami.

A model with warning protocols has been developed and is to be piloted in four countries. A guide was also produced to allow easier adaptation in other countries.

In Antigua, an earthquake simulation caused major damage including the collapse of a four storey building. “We were able to mobilize the Regional Security System (RSS) [whose] military troops will lend support for areas related to security,” she revealed. “We were also able to mobilize the CARICOM Disaster Relief Unit “¦ as well as search and rescue teams from St. Kitts and Nevis and Barbados.”

Emergency personnel from Jamaica and Dominica were placed on standby in this exercise.

In a case of life imitating art, the region is better prepared to handle the current threat posed by the H1N1 virus, commonly known as swine flu. Colonel Eric Rose of the United States Army disclosed that one of the first scenarios held earlier this year dealt with the spread of a pandemic influenza from South America, into Central America and then the Caribbean.

Inter-agency communication, warning alerts and health officials were involved in controlling the outbreak. The CDERA official stressed that this exercise and the subsequent review was extremely timely and will be useful as authorities brace for the possible entrance of the H1N1 virus into the Region.

Lieutenant Colonel Patrick Wallace of the St. Kitts-Nevis Defence Force noted that the Federation has benefited from its association with FAHUM as it has provided networking opportunities, information sharing and best practice models that serve to raise the skill of local emergency and rescue officials.

FAHUM is a U.S. Southern Command-sponsored multinational exercise that concentrates on improving how civilian, government and military agencies from the United States, the Caribbean and Central America respond to natural disasters in the region.