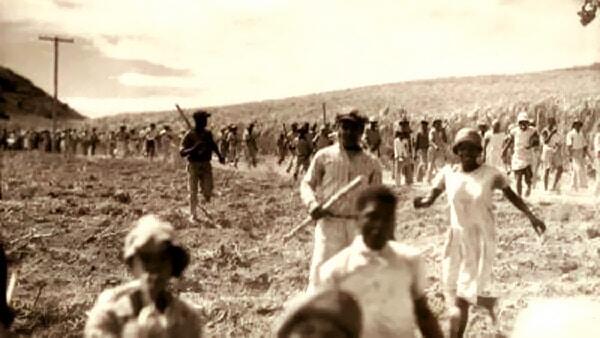 Reflecting on the Buckley’s Riots of January 1935, Prime Minister, Dr. the Honourable Timothy Harris said, at a recent commemoration ceremony at Buckley’s Estate, that is it critically important that the citizens reflect upon the ideas behind the uprising, which were ideas for growth, development and ideas for the salvation of the nation.

“Ideas are more powerful than monuments,” said the prime minister. “Ideas are what drives progress everywhere and if we could think about an idea that led to a riot way back in 1935, one idea, a simple but powerful idea that still lives on, was that as a people everywhere conscious of their existence (they) always want better.”

The prime minister said that the Buckley’s Riots were fundamentally about bettering the living conditions of the people. He said that the idea is still relevant even after 82 years.

“What we may consider better then, in that dark period, that difficult period after war, may no longer be in the same context,” he said. “The qualitative betterment of which we seek in the 21st century in a modern St. Kitts and Nevis is a powerful idea whose time will always be “˜now for action’.”

Prime Minister Harris said that the government recognizes and appreciates the “historical and important development that transformed the lives of everyone in St. Kitts and Nevis, not just workers.” He said that it led to enhancement of workers’ rights and a recognition that “notwithstanding our difference in terms of class predisposition, everyone was equal and the idea then was one of equality.”

The prime minister said that globally, persons are still fighting for equality. He cited an example of the United States of America (USA) where in some communities “a black man is at war with himself and the black woman is being victimized by the black man.” The prime minister said that what is learnt from history, and the most powerful idea when the dots are connected, is the idea that ultimately “for our own preservation, we need unity.”

“We need unity and it is biblical as it is natural, for in Psalms 133, we are told how pleasant it is that brethren, and we may add sistren, may dwell together in unity,” he said. “The Buckley’s Riots happened because there was unity of action. There was an acceptance of the power of the idea of betterment that each of us must own, and as workers journeyed from Buckley’s, which was at the time one of the largest estates, the idea was what was moving people to act in unity for their own interest and development.”

Prime Minister Harris said that out of the uprising there was acceptance. He said that the Moyne Report, which came after, accepted that all over the Caribbean, the circumstances were difficult. He added that they were harsh and unkind and it was “a reflection of an inequity of man to man, which needed amelioration.”

“So, I want to say that as we look forward to the future, only the future we can consecrate,” said the prime minister. “We accept that the history is there and at the end of the day the messages and ideas will drive us on as the inheritors of that legacy which we now have. The ideas with respect to unity, the ideas in terms of our pathway to our development, the ideas in terms of what anchors our society and certainly some of the issues that were there in 1935 are still with us. They are part of our lives as time goes on.”