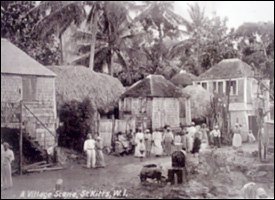 The historical importance of Buckley’s Estate Yard to the social, economic and political empowerment of St. Kitts and Nevis will soon be commemorated with an appropriate symbol.

This has been disclosed by St. Kitts and Nevis Prime Minister Hon. Dr. Denzil L. Douglas.

Responding to a question during his weekly radio call in programme “Ask the Prime Minister,” Dr. Douglas said he has been approached by the St. Kitts-Nevis Trades and Labour Union requesting the government to respect the historical moment that Buckley Estate Yard holds in the nation’s history.

It was at Buckley’s Sugar Estate that the 1935 Riots began and which later spread throughout the Caribbean region resulting in the British Government appointing the Moyne Commission to look into the poor social conditions in its Caribbean colonies. It was also at Buckley’s Estate Yard  that the Federation’s First National Hero, The Right Excellent, Sir Robert Llewellyn Bradshaw returned and symbolically nationalised the sugar lands in 1974.

“Those of you who were at the public meeting on Sunday night at Buckley’s Estate, it was on hallowed grounds; the site of the riots that erupted in 1935 where the blood of our ancestors was shed in order that we could have the freedom, we would have the kind of social justice, we would have better wages, better health conditions and better shelter that we enjoy today and which they fought for with their lives back in the 1930’s,” said Dr. Douglas.

“We will have a proper committee in place that will seek to do exactly what that this caller has indicated; put a monument there and a learning centre so that we would be able to have generations of the future and of the present, understand the conditions under which our people lived,” said Prime Minister Douglas.

“The low, low wages that they worked for. The health conditions that they encountered as they had to summon the strength everyday to go to work and how inappropriate their shelter (housing) and accommodation was at home or what they called their home which of course were very terrible. It was poor conditions that our people lived in,” said Prime Minister Douglas, adding: “I believed that this caller speaks for the entire population of St.Kitts and Nevis, especially that who are enlightened.”

Prime Minister Douglas noted that it was on Sunday last during a political meeting of his ruling St. Kitts-Nevis Labour Party that the Deputy Prime Minister, Hon. Sam Condor, the Parliamentary Representative for the Buckley’s area, showed a documentary in which he interviewed senior citizens of the Buckley’s area “who had their own real life experience of the conditions under which they and their parents lived and worked in those days.”

Dr. Douglas used the opportunity as he did at the Political meeting to heavily criticise “those who are trying to erase history by prostituting themselves in order to attempt to rewrite our history, because they are at the bid and call of those in society who are ashamed and afraid for other people to know of the sordid history that they are all enmeshed in.”

Dr. Douglas said that the truth shall prevail and whether it is this administration or a future Labour Administration that will succeed this one, “that symbol will be established.”

He said he has given a commitment to the Union that by next Labour Day, “we will be visiting Buckley’s Estate Yard where our comrades fell as a result of the viciousness of the bullets which penetrated their bodies and spilled their blood and took their lives in order that we can have decent wages, proper health conditions and better housing conditions today.”

Prime Minister Douglas said his government remains committed “to continue to ensure that our people enjoy adequate wages, improved health care and health services and appropriate affordable homes for our people of St.Kitts and Nevis.”