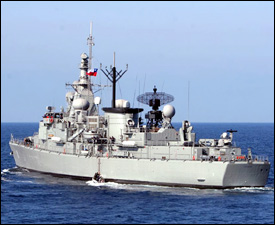 The British warship HMS Manchester is limiting its visit to St. Kitts to Saturday morning before heading for Bermuda now under the gun of a powerful Hurricane Igor.

British High Commissioner to St. Kitts and Nevis His Excellency Mr. Paul Brummell while paying a courtesy call on Prime Minister Hon. Dr. Denzil L. Douglas on Friday afternoon informed that the Type-42 Destroyer will stock up on local supplies Saturday morning before heading for Bermuda at 11 o clock to assist in getting the British Territory return to normalcy if necessary.

The Cocktail Party has been cancelled and the crew will not participate in the parade as HMS Manchester has been reassigned to a Hurricane Aid Mission in Bermuda.

The modern warship is equipped with medical and engineering personnel. It also carries a Lynx helicopter.