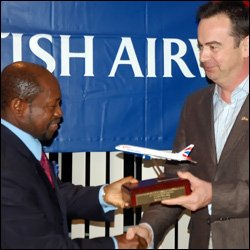 British Airways brought in more than 4,000 passengers into St. Kitts – Nevis’ Robert L. Bradshaw International Airport for the first half of this year, Minister of State for Tourism, Sports and Culture, Sen. the Hon. Richard Skerritt disclosed Wednesday.

He said that the second scheduled weekly flight from London’s Gatwick Airport into the Robert Bradshaw Airport will take off on Tuesday 23rd March 2010.

“I speak for our key partners, our hoteliers and all stakeholders involved in the tourism industry in St. Kitts and Nevis in welcoming this excellent news from British Airways at a time when there is still uncertainty in the industry. We have developed an especially positive relationship with British Airways and we look forward to continuing this successful partnership long into the future,” said Skerritt.

He expressed delight that British Airways has had the confidence in the future growth of tourism in St. Kitts and Nevis to bring in two new flights in just 14 months.

“The UK is increasingly becoming an important market for St. Kitts with British Airways bringing in more than 4,000 passengers in the first half of 2009 alone,” said Skerritt.

On January 10, 2009, eight months ago, the first scheduled British Airways service touched down to great fanfare.

“We’re delighted to be increasing the number of flights into St. Kitts. The island has been proving extremely popular with our customers thanks to its beauty; atmosphere and the warm welcome travellers receive,” said British Airways’ Head of UK & Ireland Sales, Richard Tams.

“We now operate more flights into the Caribbean than any other carrier, serving 14 destinations with 55 flights a week and we remain committed to the region,” said Tams.

The additional service which will fly every Tuesday from 23rd March 2010 is especially good news for current key tour operator partners, while being a potential route for new operators with plans to feature St. Kitts, and sister island Nevis, for 2010 holidays.

A number of initiatives planned by the St. Kitts Tourism Authority in the following months will also ensure its continued success.

The BA aircraft will use a similar configuration to the existing Saturday flight with a three class, 280 seat Boeing 777 aircraft holding 40 Club World seats, 24 World Traveller Plus and 216 World Traveller seats.