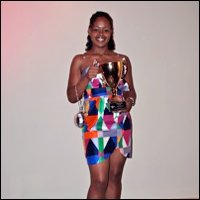 Permanent Secretary in Education for the Nevis Island Administration, Mr. Joseph Wiltshire and Principal Education Officer in Nevis, Mrs. Lornette Queeley Connor and other top ministry officials were on hand for the event.

The evening began with an invocation by Bishop Ron Dublin-Collins – President of the St. Kitts Teachers Union, followed by welcome remarks from President of the Chamber of Industry and Commerce, Mr. Mark Wilkin.

Remarks were also made by the Deputy Prime Minister and Minister of Education the Hon. Sam Condor, who congratulated the awardees on a job well done.  He also noted that although education was very important, one should remember kindness and good ethics were equally important.

“We must remember that it was brilliant people that brought down Wall Street,” said Mr. Condor.

The St. Theresa Convent School named Teacher Linden Schwiers, while Jedroy Percival was recognised for his contribution to the Cayon High School.

The feature address was given by Cuban trained Dr. Garfield Alexander, who spoke on the importance of being happy with oneself and to always follow the beat of your own drum.

Head of Corporate Sales, LIME, Mrs. Bibiana Henry spoke to the young students about what she stated was of personal importance to her. She informed them that it was important that young people utilised their right to vote. “It is your right to vote and without you using that right you have no right to complain.”

Certificates and awards were given out by David Lake of LIME and a well received vote of thanks was given by Michelle Slack.

Chairwoman for the evening, Ms. Wendy Phipps concluded the ceremony by saying that in all her years of attending the Academic Excellence Awards, this year’s vote of thanks presented by Miss Slack was the best ever.

Ms Phipps also congratulated all the awardees and remarked,”You are on the path to becoming one of the future leaders of many communities and we encourage all of you on the path to greatness.”