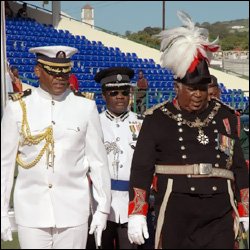 The opposition People’s Action Movement (PAM) said Friday it has lost respect for the Federation’s Governor General His Excellency Dr. Sir Cuthbert Sebastian and will dismiss him if the Party wins the January 25th general elections.

Speaking at a political meeting of the Party in East Basseterre on Friday night, the PAM candidate for St. Christopher 1, Mr. Glenroy Blanchette accused Sir Cuthbert of signing the necessary Proclamation in July to change the constituency boundaries.

“I have no respect for him. The Governor General and (Prime Minister) Denzil Douglas are working hand in hand and so I have no respect for him and I am saying that tonight, because a change is coming on the 25th of January and we are going to have a new Governor General in this country,” said Blanchette, who resigned a teaching job with government to contest the 2004 general election. He lost to Minister of Public Works, Utilities and Transport, Dr. the Hon. Earl Asim Martin.

The governing St. Kitts-Nevis Labour Party has consistently accused the former PAM Administration of rampant victimisation during its 15 year reign from 1980 to 1995. The Government said a PAM administration of Mr. Lindsay will dismiss over 500 civil servants if it wins the upcoming elections.

The State Governor, Sir Probyn Inniss, was given three days to vacate Government House in 1981 and was among hundreds of civil servants who were dismissed, demoted or transferred by the Kennedy Simmonds PAM Administration.