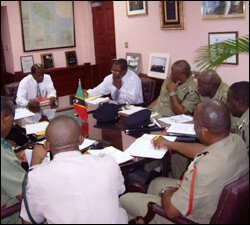 A regular meeting of the National Security Chiefs was convened in Nevis on Tuesday.

The officials received a report from Inspector Hilroy Brandy on the recent homicides on Nevis and discussed the crime situation on Nevis and the execution of a strategic plan.