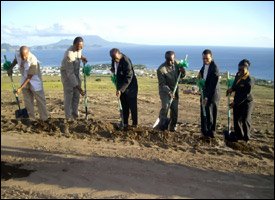 The EC$25 million Beacon Heights Housing Development Project of the St. Kitts and Nevis Social Security Board will not only promote and facilitate public/private sector partnerships, but will also create wealth for nationals in owning “a piece of the rock.”

Speaking at Thursday afternoon’s ground breaking ceremony for the project which will see the construction of 193 homes on 84 acres of land overlooking Camps, Buckley’s Estate, Basseterre and the Caribbean Sea, St. Kitts and Nevis Prime Minister, Hon. Dr. Denzil L. Douglas said the project will create a multiplicity of jobs for a wide range of local workers and specialists.

“This, in turn, will result in a significant increase in purchasing power at the local level.  And the injection of these funds into our economy will have a multiplier effect that will ripple far beyond the physical boundaries of this development, to the benefit of all of us in St. Kitts and Nevis,” said Dr. Douglas.

He said while Beacon Heights is also about an economic stimulus initiative, it is emblematic of his governing Labour Administration’s commitment to expedite and facilitate home ownership for the people of the twin island Federation.

“Beacon Heights is about empowerment through home ownership. This is a priority of ours because we understand that home ownership has always been, and will always be, one of the surest paths to economic security, and one of the very safest paths to wealth creation.  And I believe that Social Security is about wealth creation. And this is what we want for the people of this country.  And so, throughout the time that we have been fortunate enough to be in government, we have consistently created, and we shall continue to create, the ways and means for more and many more of our people to obtain, as they say, “˜a piece of our rock,’,” said Prime Minister Douglas.

He said that the completion date of the infrastructural works is April 2010, and the Social Security Administration projects that this project will inject some $200 million into the local economy.

“In this time of collapsing financial markets overseas, and in keeping with the Social Security Board’s commitment to prudent management of the funds at its disposal, Beacon Hills represents a special opportunity for Social Security, not only to protect the funds of the workers of this country, but, indeed, to invest them in a manner that would, more importantly, boost the value of the holdings of the Social Security Administration,” said the St. Kitts and Nevis leader.

“This compliments my Labour Government’s own initiatives in continuing to provide homes for a people,” said Dr. Douglas, who noted recent ground breaking ceremonies for the Scenic Housing Development Project by the St. Kitts Cooperative Credit Union and the 500 home National Housing Corporation (NHC) Programme for the ordinary man and woman of St. Kitts and Nevis. He said land has also been sold to National Insurance for housing development.