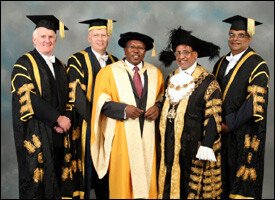 St. Kitts and Nevis Attorney General and Minister of Justice and Legal Affairs, the Hon. Dennis Merchant, has received an Honorary Doctorate from Birmingham City University in England.

The prestigious honour of Doctor of University was conferred on Mr. Merchant for his professional eminence and outstanding contribution to public life by the Chancellor, Councillor Chauhdry Rashid, at an Awards Congregation Ceremony in Symphony Hall.

The ceremony celebrated the work and achievements of Birmingham City University students graduating in the Department of Computing, School of Law and School of Social Sciences at which St. Kitts and Nevis Attorney General delivered the feature address to the graduands.

Dr. Merchant, the former Director of Public Prosecutions of the Federation of St. Kitts and Nevis began his career as a clerk to the Magistrate in District “A” Basseterre and has risen through the ranks to his current position.  He gained his Law Degree from the Birmingham City University.

Following his Law Degree Mr. Merchant obtained his qualification as a Practising Lawyer in the United Kingdom, where he worked for several years and later studied in Trinidad to gain his legal education certificate from the Hugh Wooding Law School.

His experience on both criminal and civil litigation has seen him represent and advocate in many of the courts in England and Wales, the OECS as well as the Privy Council.

In a brief moment with the Attorney General, he commented that it was indeed an honour to receive this Award from this Established English University.

“Moreover, it was a pleasure for my mother Mrs. Rose Harvey to bear witness to the proceedings. It was equally inspiring for me as a son of the soil of this Federation to deliver the Keynote speech to the congregation of graduates,” he said.

Birmingham City University is the United Kingdom’s most “in demand” university according to a table of top performers published in influential sector magazine, Times Higher Education (THE).

Birmingham City University has seen the biggest increase in students applying for places this September compared to any other UK university, an increase of 35.6 percent compared to a national average of 8 percent.

Formerly known as the University of Central England, over 24,000 students currently study at one of Birmingham City University’s seven faculties.

The Birmingham Institute of Art and Design, (also known as BIAD) is the largest centre for design and media education outside London and rated as one of the top ten UK Art and Design institutions.

The University’s substantial performing arts provision includes Birmingham Conservatoire, a specialised music college of international stature which trains musicians to the highest standard in performance and composition and Birmingham School of Acting, one of the UK’s leading vocational drama training schools.

Birmingham City Business School is a key regional centre which, with 4,000 students, is one of the largest business schools in the UK. Specialisms include organisational development, knowledge management, auditing and Entrepreneurship.

The Faculty of Education, Law and Social Sciences specialises in the fields of education and teacher training, law and legal studies, criminology, human rights, sociology, psychology, policy and housing studies. The Faculty has an excellent national reputation for its education and teacher training programmes and its School of Law is a major centre for legal education and training. The School of Social Sciences contains one of the five dedicated University research centres of excellence led by the Centre for Criminal Justice Policy and Research.

The Faculty of Health, one of the country’s largest centres for non-medical health education, and including the new Defence School of Health Care Studies, which trains military nurses and professionals.

The Faculty of Technology, Innovation and Development (formerly known as the Technology Innovation Centre) is a national centre of excellence for learning, innovation and technology transfer. The University supports individuals, organisations and communities in developing their understanding and capabilities within a rapidly developing technology-based society, providing cutting-edge resources and specialised knowledge to meet the demands of the 21st Century.

The Technology Innovation Centre, offering a wide range of courses in computer technology, multimedia and engineering. Its Millennium Point facilities are among the best in the country.