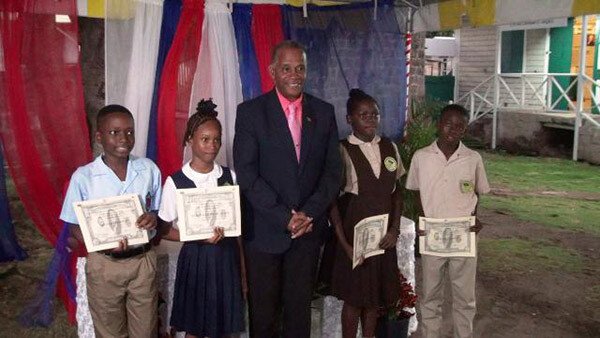 Eric Evelyn, Minister of Social Development in the Nevis Island Administration (NIA) believes that students who are the recipients of Alexander Hamilton Scholarships should educate others about Alexander Hamilton, a born Nevisian who later left his mark in the United States of America.

The minister made the comment recently at a Alexander Hamilton Tea Party hosted by the Nevis Historical and Conservation Society (NHCS) in collaboration with the Department of Community Development, at the Alexander Hamilton Museum grounds.

“I would encourage our students to, in some way be the torch bearers of educating persons more about Alexander Hamilton.

According to a report on the scholarship program from the Department of Community Development in the Ministry of Social Development, which is administering the Alexander Hamilton Scholarship Fund, at the start of 2019 there were 16 students enrolled in the program.

This year four recipients were added to the scholarship program namely Ms. Kaya Williams-Mulraine and Mr. Jae-Ele Swanston from the CSS and Ms. Noella Maynard and Mr. Stephan Leader form the GSS.

Alexander Hamilton rose from humble beginnings to become a founding father of the United States, Chief of staff to General Washington, first US Secretary of the Treasury one of the most influential interpreters and promoters of the American Constitution. He was a lawyer, military leader, political scientist, journalist and a government official.

Alexander Hamilton was born and spent part of his childhood in Charlestown, the capital of the island of Nevis in the Leeward Islands (then part of the British West Indies). Hamilton and his older brother James Jr. (1753–1786) were born out of wedlock to Rachel Faucette, a married woman of half-British and half-French Huguenot descent, and James A. Hamilton, a Scotsman who was the fourth son of Laird Alexander Hamilton of Grange, Ayrshire. Speculation that Hamilton’s mother was of mixed race, though persistent, is not substantiated by verifiable evidence. She was listed as white on tax rolls.

Alexander Hamilton (January 11, 1755 or 1757 – July 12, 1804) was an American statesman, politician, legal scholar, military commander, lawyer, banker, and economist. He was one of the Founding Fathers of the United States. He was an influential interpreter and promoter of the U.S. Constitution, as well as the founder of the nation’s financial system, the Federalist Party, the United States Coast Guard, and the New York Post newspaper. As the first Secretary of the Treasury, Hamilton was the main author of the economic policies of George Washington’s administration. He took the lead in the Federal government’s funding of the states’ debts, as well as establishing the nation’s first two de facto central banks, the Bank of North America and the First Bank of the United States, a system of tariffs, and friendly trade relations with Britain. His vision included a strong central government led by a vigorous executive branch, a strong commercial economy, national banks, support for manufacturing, and a strong military.