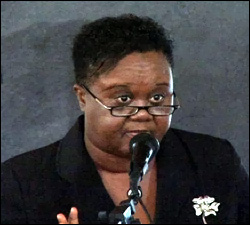 The Education Officer told the participants that in reality, employers sought after those who they felt had the right attitude and not necessarily those who had obtained high grades in their overseas examinations.

Life could be unfair she told the students but every situation that confronted them should serve as a learning experience.

“The job that you felt that you so badly needed may be the job that ends up being the worse job you ever had. However, that job can provide you with valuable lessons that you would not have found in a classroom. Try as much as possible not to quit a job before you have nailed another one,” Ms. Bussue said.

Student’s attention was drawn to a shrinking job market which was available for the increased number of school leavers and she advised the students to think of innovative ways that would improve their chances of being hired.

The Education Officer also spoke on the importance of meeting deadlines.

“You may have been annoyed at teachers for refusing to take your work after the due date. What you may not have realised is that they were teaching you the valuable lesson of meeting deadlines. You see, some things are just not negotiable. Employees are looking for a good person who can handle pressure and meet deadlines,” she stated.

Students were also called upon to be creative because according to Ms. Bussue, employers were looking for persons who could come up with creative solutions to the problems faced on the job and wanted innovative and efficient ways of doing things.

The last point dealt with attitudes and she urged the students to leave their bad attitudes at home. A real life example which she believed occurred as a result of bad attitudes was given to drive home her point.

“Don’t check into the office with it. No one wants to deal with a miserable co-worker. No one wants to deal with your attitude. The bottom line of a company is profit making. If you are going to be an obstacle to profit making, their bottom line, you will soon find you don’t have a job and your parents, the government and the Labour Department cannot force them to hire you.

“When Four Seasons reopened, a number of persons were not rehired and people complained but I want to believe that management used that opportunity to get rid of some of the people, especially those with the bad attitudes. They were bad for business and they don’t want them back. So watch your attitude. It is said that attitude determines your altitude,” she advised.

Ms. Bussue reminded the students that leaving school for the world of work was a major step in their development and that it was a sign of maturity and accomplishment.

However, she warned the school leavers that finding a job was not always easy but encouraged them to be patient.

“I want to wish you every success as you navigate the market in search of a job. Be encouraged. There will be times when you will get weary of waiting for a job but keep a prayer on your lips and keep looking. You may have to make adjustments here and there, but a breakthrough will come,” she said.