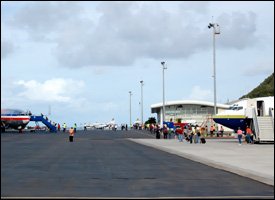 The twin-island Federation’s airlift programme into the Robert L. Bradshaw International Airport has been the envy of many neighbouring destinations.

So says St. Kitts and Nevis Minister of State for Tourism, Sen. the Hon. Richard Skerritt.

He told Parliamentarians at Tuesday’s sitting last year when other islands were losing international capacity, air service to St. Kitts was increasing.

“We secured a direct flight from London by British Airways, as well as increased non-stop service on American Airlines and Delta Airlines from the key gateway cities of Miami, JFK and Atlanta.  Visitors and locals alike can now travel direct non stop to Miami every single day of the week,” said Minister Skerritt.