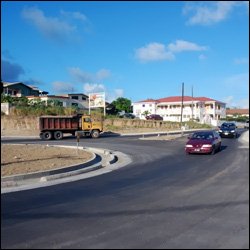 The West Bypass Road At Buckleys
Photo By Erasmus Williams

The Shadwell Link Road, airport drainage, junctions at Buckley’s and diversion of utilities have been added to accommodate the physical, social and developmental conditions of the West Bypass Road Project now under construction.

St. Kitts and Nevis Prime Minister Hon. Dr. Denzil L. Douglas said during his weekly radio call-in programme “Ask the Prime Minister” on Tuesday that the additional works have been approved by the Barbados-based Caribbean Development Bank (CDB) at a cost of nearly EC$11 million.

Dr. Douglas said the road drainage system in the vicinity of the Robert L. Bradshaw International Airport had to be substantially increased to accommodate the volume of water that ran off the airport and into the Kim Collins junction area.

He said that the Shadwell Link Road will accommodate the growing need for housing.

“The original junction proposed as a T junction that provided a link to St. Peters was upgraded to a roundabout.  A new 800 meter road and a new bridge over the College Street Ghut now provide a link to the Shadwell communities enabling growth and development,” said Prime Minister Douglas.

He said that during the implementation of the project various utilities were encountered that had to be diverted to accommodate the new road works. Poor ground condition were encountered at the College Street Bridge and the foundations required additional excavation.

He said the improvement to the road drainage works, upgrade of the Shadwell junction, the upgrade of the Buckleys Junction, diversion of the utilities and bad ground conditions will cost an additional EC$6.6 million.

The additional cost for the New Shadwell Road Link and new bridge over the College Street Ghut is estimated at EC$4.36 million.  The cost estimate for all the additional work is EC$10.96 million.

The original project consists of the construction of a new approximately 4km new road that that is intended to serve as a means for traffic travelling to and from the eastern and western parts of the island to bypass the often congested roads within Basseterre.

Access to the new road will be provided from major areas within Basseterre and the surrounding villages.  This will ensure enhanced traffic flows in Basseterre.

The works comprise of three major components, the construction of an asphaltic concrete single carriageway, with a hard shoulder and road side drainage system, four major bridge structures, and six major junctions. The new road will be illuminated to international standards.

The Contract was awarded to Professional Technologies (Anguilla) Limited on 17th October 2006 for EC$ 18.3 million.

An independent engineering consultant, Halcrow Group Ltd, was appointed by the Caribbean Development Bank to provide the supervision and quality control for the project.