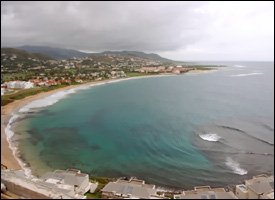 Despite the world economic and financial crisis, nearly 20 condominium units were sold at Ocean’s Edge Development.

Legal Counsel for the developers, Ms Siobhan Lloyd said the integrated resort development situated at Cable Beach on the south eastern end of Frigate Bay sold 18 condominium units during the first half of this year.

15-two-bedroom hillside units have been completed and furnished and two buildings each with 8-one bedroom beachside units should be completed as part of Phase Two by the end of October this year.

“We already have tenants occupying six of the hillside units. We had 18 sales for the first half of 2009 despite the global economic climate. People are sill buying,” Lloyd told a touring party of government officials led by St. Kitts and Nevis Prime Minister Hon. Dr. Denzil L. Douglas.

Lloyd said she expects there are 25 owners and friends to be occupying several of the condos by Christmas.

Dr. Douglas, accompanied by Parliamentary Representative and Minister of Public Works, Utilities, Transport and Posts, Dr. the Hon. Earl Asim Martin and Minister of State with responsibility for Tourism, Sen. the Hon. Richard Skerritt, were taken on a tour of the property by Newfound Regional Director, Mr. Robert Scott.

Mr. Scott said EC$40 million has been spent on the project and the next phase will incur expenditure of EC$50 million, which will include infrastructure.