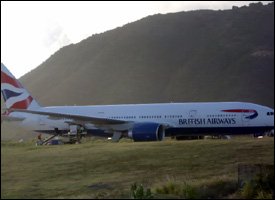 Sources told CUOPM that most of passengers were visitors for several hotels on both St. Kitts and Nevis.

One hundred passengers were on the inaugural flight on January 10th.

Owner and innkeeper of Ottley’s Plantation Inn, Marty Lowell said when he found out that the BA flight was going to operate, he was “blown away. It’s such good news for the island.”

“This is a historic moment. The withdrawal of XL flights was terrible news for Kittitians. The arrival of BA means so much to the thousands of people employed by the tourism sector,” said Prime Minister Douglas.

Premier of Nevis, the Hon. Joseph Parry, said the establishment of a route from London to St. Kitts and Nevis is a major tourism boost for the Federation and is going to help to fill up hotel rooms on Nevis.

“The UK market has been stable but now has the opportunity for growth,” said Minister Skerritt.

British Airways Head of Sales for the UK and Ireland, Mr. Richard Tams, said he believed St Kitts and Nevis fitted the airline’s premium brand and predicted the route would grow in significance.