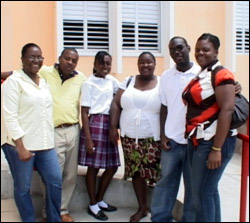 Members Of HOPE In Nevis

A renaissance movement has become the buzz on Nevis.  A group of young vibrant Nevisians came together and formed the Helping Our People Excel Organisation (HOPE) Nevis. The Organisation which was established in August of 2006 immediately set out to work in the community to introduce and accomplish their goals and aspirations.

The group of young men and women soon became attached to St Johns Primary School students and teaching fraternity, after they gave their initial motivational speech and the guidance counselor suggested that they should adopt the school.

According to one of the Organisation’s representative Ms. Shanelle Simmonds, the idea to adopt St Johns Primary was agreed to after the issue was discussed among the executive body and other members. HOPE Nevis thereafter, continued to impress upon students through additional motivational speeches.

The historical background for SJPS appeared distinct from other schools on Nevis. While other Primary Schools were being renovated or upgraded to brand-new modern educational facilities, the school’s building remained one of the older structures on the island, until recently when students were relocated to an ultra-modern school edifice with a modern library, Science and Computer labs.

It was however recognised, that the School’s Library had room for expansion as it related to books. In a recent exclusive interview with the Department of Information Ms. Simmonds, revealed that an assortment of books for the school’s library was needed to further stimulate student’s learning.

“As we continued with motivational sessions with the students, we are now in the process of getting books for the library because it is big and could hold much more books. We have partnered with another Organisation to get the funds to buy some books,” Ms. Simmonds said.

In HOPE’s relatively short existence, it has also established a Hope Deserving Childs Award Fund (HDCAF). The fund was designed to help underprivileged students attending the two public High Schools on Nevis to receive hot lunches. A total of four students is said to have so far benefited from the gesture.

The Organisation continues to make an impression on the mind of SJPS students. They have recently Organised the school’s first ever Elocution Contest, which received rave reviews.

The young men and women have also expanded their services to the wider youth community. Members recently announced they were in the process of reviving the Youth Parliamentary Association (YPA) and hoped for the YPA to once again make its prominence known within the community.

The group also hosts a radio talk show on local radio dubbed “HOPE Dialogue.” This programme provides a forum for the island’s youths to discuss issues on related topics of interest.

The “Negligent or Absentee Father, Marriage and Divorce [and its effect on children] and the Proliferation of Gang Activities in the Community” were some of the topics the Organisation’s Vice President and show host Ron Daniel brought to his show’s targeted audience. HOPE Dialogue is hosted live on Thursday afternoons from 5:00pm to 6:00pm on Choice FM.

The Organisation’s Adopt a School Programme policy would be terminated after a one year period. The opportunity would then be made available for other Primary Schools in Nevis to apply. If applications are not forthcoming from other schools, HOPE Nevis indicated their focus would remain on St Johns Primary School.

The group of young Nevisians said their long term goal and future ambition’s for the Organisation, is to expand its policy to the wider Caribbean to positively influence their peers in other Caribbean islands.

Another member of the Organisation Ms. Shenelle Pemberton, indicated that HOPE Nevis was a non-profit Organisation and was not affiliated with any government operated youth programmes or any other Organsaitions on Nevis.

“We are independent of any government run programmes or any other groups. If the government is having a function that concerned young people and they requested HOPE Nevis’ assistance, we would send representation to that function to assist in whatever they have requested,” Ms. Pemberton said.

To learn more about HOPE Nevis, its website is accessible at www.hopenv.org