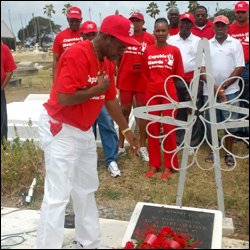 Glowing tributes were paid to the stalwarts, architects of modern development in St. Kitts and Nevis for their sterling contribution in the economic, political and social development of the nation in the areas of leadership and the march towards political independence, finance, healthcare, tourism, social security, agriculture, education, light manufacturing, culture and trade unionism.