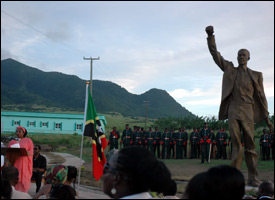 Following the inspection of a Guard of Honour comprising members of the St. Kitts-Nevis Defence Force, the Royal St. Christopher and Nevis Police Force and the Cadet Corps, the bio of the St. Paul’s-born National Hero, who also served as Chief Minister and First Premier will be read by Mr. Crios Freeman.

Prime Minister Douglas, a cousin of Bradshaw and who also hails from St. Paul’s, will deliver brief remarks.