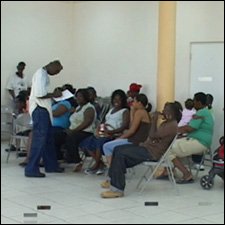 Orientation sessions for work experienced persons enrolled in the Youth Empowerment through Skills (Y.E.S.) project concluded on Wednesday, and officials say that the response to this initiative has been heartwarming.

The Y.E.S. project was launched in mid February and focuses on skills development, employment opportunities, and career and social development through a work-experience and job placement programme. It caters for young men and women between the ages of 16 to 35.

The Sandy Point Community Center marked the end of a country wide tour which took the message of the programme directly to citizens. SKNIS spoke to Essington Watts of the National Skills Training Programme who is assisting the process. He said that community outreach is an important part of the project.

“The whole purpose of the project is to help curb “¦ [crime],”Mr.  Watts stated. “We want to reach out to youth in the communities and help establish a dialogue with them so that we can know what is affecting them and how we can help. The project is designed for 500 persons and we are way over that so the turnout has been great.”

He explained that while the project was designed for 500 people, Government was sensitive to the needs of the community and gave administrators the permission to accommodate as many as possible from the extra numbers.

“We will have to find the money somehow [to help] because so many people need to be touched,” Prime Minister Douglas stressed at the time.

A number of participants at the Sandy Point Community Center told SKNIS that they were grateful for this Governmental initiative.

Tajola Thomas of Fig Tree indicated that she was looking forward to enhancing her secretarial and accounting skills. “It will help me a lot. I am excited to learn new things. I would like to say that the [organizers] are doing a good job,” she said.

Denzil Adams agreed. He has registered for the landscaping category. “I think [this project] is a good idea because a lot of people in St. Kitts [don’t] know how to go about getting a job,” he stated, adding that the social skills component will help to promote greater appreciation for others and how to work in a team. “I would like to say thanks.”