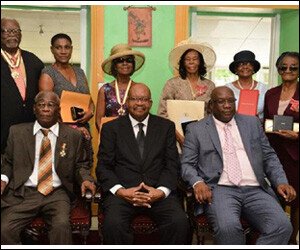 Eight nationals of St. Kitts and Nevis were publicly honoured for their outstanding work ethic that contributed significantly towards the development of the Federation.

This took place when Acting Governor General His Excellency S. W. Tapley Seaton presented them with medals at an Investiture Ceremony at Government House on August 25.

Commenting on his first Investiture, Acting Governor General Seaton said that the proceedings went well and that the honorees were clearly well supported by their relatives and friends.

“It’s always a useful occasion to be able to praise persons who are deserving of honors,” the Acting Governor General noted.

“We sought to publicly give the acclaim, the respect, the honor that these deserving citizens require at this particular time as we remember their work toward national growth and development.”

National Honours Awards were also presented to six individuals.  The Order of National Hero award was bestowed posthumously on Dr. the Right Excellent Sir Simeon Daniel for his service in Politics and Law.  It was accepted by his widow Sheila Daniel.

Two Medals of Honour were presented to Venetta Henry for her work in Nursing and Community Service while Dawud Byron was awarded for Journalism and Music.  The three Companions of the Star of Merit awards were presented to Clement Williams for service in Science, Education and Culture, Leonie James for work in Pre-School Education and the Community and Dr. Milton Whittaker for Science and Education.