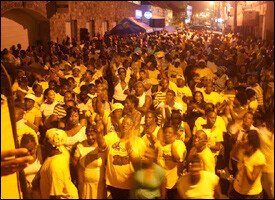 “When we had announced in July that we were going to stop the Prime Minister in his track through legal battles as he had embarked on a mission to gerrymander the boundaries, no one believed us and today we have seen the success of our court battles. As such, we want to reiterate that the Prime Minister will not take the people of this Federation for granted anymore, as we will not sit by and allow him to continue on such a path.”

This was the declaration made by the Leader of the People’s Action Movement (PAM), Lindsay Grant.

Grant, in an interview, subtedly unravelled plans to address issues of concern to the people of the Federation. He stressed that neither he nor his party, the PAM, would allow the PM to intimidate or lure them in any misguided manner but rather they would use much thought and wisdom in the strategies they choose to employ.

“We are cognizant of the strategies that he has been using in an attempt to get at us, but we will continue to remain steadfast in our positions and efforts in having him and the Labour Party removed from office,” Grant assured.

In fact, he noted that PAM has sought to incorporate innovative ways of voicing its concerns. “We recognize that many of the media houses have not been giving us equal voice as they give to the Prime Minister and the Labour Party. We have realized that the media houses today have been giving the Prime Minister and the Labour Party significant media mileage while PAM continues to be denied equal and fair opportunity. However, we are determined and will therefore continue to persevere in ensuring that our messages get out through various mediums,” Grant said.

“It’s evident that PM Douglas is bent on deliberate acts in his desperate pursuits of remaining in office at all cost, and we are confident that when the “Ëœdust’ settles he will no longer be the Federation’s Prime Minister,” he added.

This move, Grant stressed, was very critical because it has been observed that dirty tricks are being perpetrated by the PM and his allies in an attempt to deny the public from electing a government of its choice.

“The people want change and the Prime Minister must recognize that the only thing that “Ëœwuking’ is crime and violence and, therefore, he should allow the people to have their government of choice”¦which is thee People’s Action Movement,” he said.

“We within PAM will not play the game that Douglas and Labour want us to play, as we will play by the books. We want Douglas to know that no amount of gerrymandering and electoral fraud will deny PAM from being victorious. They are claming that they would have a fourth consecutive victory, but I want the Prime Minister to wake from his slumber and face the reality that he is no longer wanted by the people of St. Kitts and Nevis,” Grant declared.

Grant said that he and his party would continue to use whatever means necessary to ensure that the atrocities being committed by the PM would not continue. “We have our supporters standing by as I have always said, because when we call them out to the streets they will come as enough is enough. Let me warn the Prime Minister that no army or police will deter us or create mayhem, as we are determined as ever.”

According to Grant, his party has been carefully studying the machinations of some “wicked and demonic” persons who are seeking to uncover the many strategies being streamlined by the PAM.

Grant added, “I am therefore suggesting to all of our supporters to be on guard and ready to heed our call when we issue it, for if you want improvement in the quality of life you will have to make the change in 2010 when elections are called. Enjoy the spirit of Christmas and Carnival, as come next year we will no longer have blue Christmases or messed-up Carnivals but, rather, we will be able to genuinely enjoy what true Christmas and Carnival means.

“I urge you all to enjoy the holidays but remember to be very prudent in your spending, as while the Government has offered double salaries the harsh reality is that they could not have afforded same and the coming year there are anticipated difficulties and challenges to be faced. Therefore, you must be prepared to take to the streets and tell the Douglas-led administration that we are all fed up with the Sesame Street administration, as it affects all PAM, CCM, NRP, Independent and even Labour supporters.”

Grant went on to state that his party’s quietness should not be taken as a sign of weakness, as it has been carefully analysing and assessing the conditions and the responses of the people. He noted that based on the most recent analysis, it is evident that  “the people of St. Kitts and Nevis  are on the move and they will not turn back until they have achieved their primary objective of ensuring change.”

He added that PAM has been meeting with people throughout the region to ensure its message of change is effectively and efficiently disseminated, “as we, like them, are very confident of bringing about a new dawn to the citizens and residents of this Federation”.

The unbearable sufferings of the people in this country, he reiterated, have reached the point of intolerance and woefully unacceptable.

“The sad reality is that the ordinary workers, nurses, teachers, the policemen, the soldiers, the civil servants”¦they are all very disgusted. They are all at a state of desperation. What they need is mature and responsible leadership, and we within the People’s Action Movement under my leadership are very committed and dedicated in ensuring that they receive such leadership. I, Lindsay P Grant, am prepared to give them the kind of leadership that they have been asking for over the past 14 years,” Grant declared.