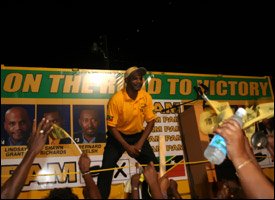 The Campaign to Victory train rolled into Baker’s Corner in the heart of East Basseterre on Wednesday evening the  24th for a pre Music Festival “Poor Can’t Take No More” rally. The People’s Action Movement brought the overwhelming momentum of the message of CHANGE to this community as well as the returning nationals who are back for the festival and the election that will soon follow. The whole corner was painted yellow as the PAM members,friends,well-wishers, supporters ,  stalwarts and even the onlookers pranced boldly about in their gold shirts and hats and waved gold rags and flags to the sweet tunes for change that accompanied the dynamic speakers on the specially designed platform.

For this special rally the entire slate of candidates with the lone exception of Mr. Eugene Hamilton who is currently travelling on business were on hand to inform and educate the large crowds that thronged the stage and hung on to every word. The message of the evening was as usual a serious one ““ our beloved country is on the very precipice of disasterr and must be pulled back from the brink if citizens and residents here are to have any decent quality of life.

Unlike the often vulgar and abusive emanations from the Labour government’s platform; speaker after speaker emphasized the critical importance of character and integrity in office holders. They reminded the listeners of the lengthy catalogue of egregious errors that have crippled the national and social infrastructure of this country including the scandal in the procurement and management of the generators at the electricity plant that have left residents without reliable power for nearly a decade; the terrible treatment of the former sugar workers; the complete abdication of any responsibility for law and order and the lawlessness and murder that is the result; the giving away of the best crown lands for a pittance to foreign interests while locals must practically beg for a tiny plot and the complete deterioration of our social services to name but a few.

The political leader Mr. Lindsay Grant brought the speeches to a close by bringing the issue of the immanent change to the constituency boundaries that are expected to be announced at the next sitting of Parliament on Thursday 2nd July which will herald the ringing of the bell to officially announce the elections. He informed the crowds that the People’s Action Movement was fully prepared to deal with any change and that they could have full confidence in the work that has been done to bring home a victory in a free, fair and credible election.

The night culminated in a concert that entertained the crowd until the midnight hour with sweet calypso music that put both the distress and the hope of the people into song.