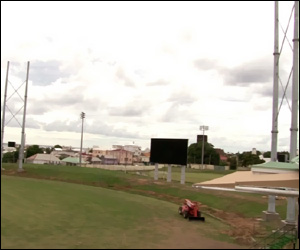 Upgrading the cricket stadium at Warner Park is in keeping with the Government of St. Kitts and Nevis‘ efforts to ensure the twin-island Federation and its people can meet the demands of an increasingly integrated global sport and entertainment environment.

On Thursday (December 05) the Minister of Sports Honourable Glenn Phillip and Prime Minister the Right Honourable Dr. Denzil Douglas toured the facility and were updated on the progress to install an 800 kilowatt generator and 1000 kilowatt transformer, erect electronic screens around the ground including a 44×22 ft. jumbotron; provide on field lighting to facilitate international matches at night and other amenities.

“What we are trying to achieve here is for us to have the best facility in the West Indies,” Minister Phillip stated, noting that the cricket facility already has earned a favourable reputation based on player and fan feedback.

To meet this goal, most of the new additions have been customized for the facility, which is also a venue for international concerts. These include the poles for the lights and screens built in the United States, while the generator and transformer were assembled in Mexico.

“We have taken it further with a futuristic view in mind so it’s going to be at least 3500 to 3700 lux in terms of the lights intensity.”

Minister Phillip said this was important so that any future changes in ICC standards are likely to not require additional upgrades at Warner Park.

Prime Minister Douglas described the ongoing work as impressive and praised the local contractors for expertly carrying out the various tasks under the supervision of Project Manager Tony Howard of Prabha Int. based in Canada. Additionally, approximately 40 persons have applied to be trained in operating the video screens which is significantly higher than previous numbers.

The Prime Minister said that the transfer of knowledge is something that he was proud of, given that local opportunities for nationals to engage in activities of this scope and scale are limited.

“This is critically important,” he stressed, noting that these skills can be applied to similar systems around the world. “This is an investment in the human capital which is what’s going to be critically important in ensuring that competitively we succeed.”

“St. Kitts and Nevis may be small, we may appear to be insignificant to some but [we are] definitely extremely significant in the impression and the legacy that we are leaving and that is what is important here.”

Prime Minister Douglas stressed that the populace must embrace the opportunities being provided so as to maintain the prominent standing that nationals have held in various fields regionally and internationally.