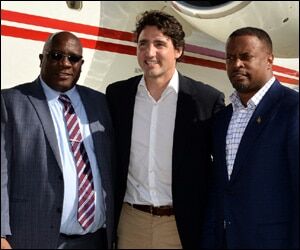 St. Kitts and Nevis’ Minister of Foreign Affairs, Honourable Mark Brantley, said he is hopeful that visa free travel to Canada for citizens of the twin-island federation will be restored.

During a recent interview to recap Diplomatic Week 2016, Minister Brantley touched on the travel issue and said the government was making a strong case to restore the privilege for citizens.

The first reason listed was the change in government in Canada in October 2015 which ushered in Honourable Justin Trudeau to the Office of the Prime Minister. The Trudeau Administration has demonstrated a more liberal and inclusive approach to policy matters, Brantley said, including the removal of visas for nationals of Mexico wishing to travel to Canada.

“My argument is basic perhaps,” he said. “If you can allow 120 million people in, what problem do you have with 50,000. The truth is as I said to someone, you can take up everybody in St. Kitts – Nevis, land them in Canada and nobody would notice.”

The foreign minister described the imposition of visa access to nationals as less of an immigration issue and more so “a failure in diplomacy.” He said a reason given by the Canadian Government to impose visa restrictions was the attempt by some nationals of Iran to use the St. Kitts – Nevis citizenship to avoid and evade sanctions imposed on their country.

“But guess what? The world has changed since then and Iran which used to be a pariah, used to be referred to as part of the “Axis of Evil”, Iran is no longer that,” Minister Brantley stated. “And the same powers that used to castigate Iran are now falling over themselves to invest in Iran and do business in Iran and so the sanctions have been lifted and so it bolsters our argument that the underlying rationale for denying our people visa free access to Canada has disappeared.”

Discussions between representatives from St. Kitts and Nevis and Canada are expected to intensify within the coming weeks. According to officials from the Ministry of Foreign Affairs, on Monday, (April 11) St. Kitts and Nevis High Commissioner to Canada, Her Excellency Shirley Skerritt-Andrew, presented her credentials to Prime Minister Trudeau. This opens the door for a high level delegation to visit the country and engage in bilateral meetings.

Minister Brantley applauded Canadian High Commissioner to Barbados and the Eastern Caribbean, Richard Hanley, for his efforts to advance mutual interests. Prime Minister, Dr. the Honourable Timothy Harris, recently met with the Canadian diplomat and his staff during a visit to Barbados.