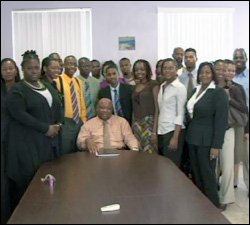 Deputy Premier of Nevis Hon. Hensley Daniel thanked a contingent of students from the University of the West Indies (UWI), Cave Hill Campus in Barbados, for their efforts to educate themselves on the challenges Nevis faced with regard to the implementation of the Caribbean Single Market and Economy (CSME).

Mr. Daniel made the comment in an interview with the Department of Information on Wednesday, at the end of a meeting with the UWI interdisciplinary group of 25 students at the Nevis Island Administration’s (NIA) conference room in Charlestown.  Their one-week visit to the Federation was facilitated by the European Development Fund and the CARICOM Secretariat.

“These issues are important for us, we are in the Caribbean region and we have to interact every time with our brothers and sisters.

“It was good that the university students sought to engage with us in the Nevis Island Administration because very often they would come to the Federal government and they would leave. So I want to thank them for recognising that we in Nevis have something to contribute to their discussion,” he said.

The Deputy Premier explained that during his presentation to the students, he was able to provide them with a better understanding of Nevis and the critical issues the NIA faced and the steps it had taken to address concerns related to the movement of skills, the development of services and the formation of companies among others.

“All in all it was a very, very interesting visit and students were able to raise questions and it was my privilege to answer them. So on behalf of our Premier and government we thank them very much and we look forward to their continued engagement with us in the Nevis Island Administration,” he said.

Meantime, leader of the group and UWI Lecturer in the Department of Government, Sociology and Social Work Dr. Pearsan Broome told the Department of Information that the visit was part of a mission carried out in all CARICOM member states.

Dr. Broome also gave an insight into the group of students.

“They are from all the faculties. We have the legal minds that will engage the difficult legal questions; we have the political scientists and they understand the politics. The ones from Humanities and Arts, they particularly speak to some of the cultural concerns and E-Governance [students] are looking at how information and communication technology can be used as an alternative form to assist government to be far more efficient and effective.

“They are not just looking at challenges but they are looking at how to find new opportunities or new ways to resolve some of these challenges and that’s what they are taking back home with them,” he said.

The group leader described the students as having keen minds with a good understanding of the challenges Nevis faced and the opportunities afforded them to effect change. It was for that reason, Dr. Broome noted, that they were driven out of the classroom setting where everything was highly theoretical to the very practical. He said the visit afforded them the chance to see reality played out before them.

The Lecturer noted that he was pleased with the student’s performance during the visit and was satisfied that they would return to Barbados with a better understand of the issues related to the CSME.

“I am also quite pleased because for a number of the students it is their first visit to St. Kitts and the Federation and the beautiful thing about them is that they didn’t come with any expectations, they have all had very, very, open minds and as such they are willing to learn.

“They have been very good at listening and trying to understand what is on the ground and as such they are going back with a lot more knowledge than what you can read about in any book or you can hear from any lecturer at this point,” he said.

Dr. Broome expressed his gratitude to the people of St. Kitts and Nevis who had given his group all the necessary assistance to accomplish their task in the Federation

“I am indebted to the people here for having hosted them and facilitated them as much as possible in everything that we have set out to do. When we leave on Saturday, mission will be accomplished and we would go back very much knowledgeable and willing to see what more we can do,” he said.

The group was also accompanied by personnel from the CARICOM Secretariat.