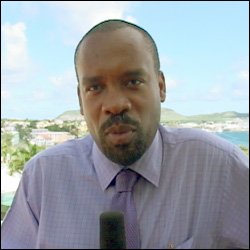 The practical working of the CARICOM Single Market and Economy (CSME) was the main feature at a forum on Tuesday, which saw young people from St. Kitts and Nevis and Barbados coming together to discuss existing opportunities under the agreement.

The local youth gained a wealth of knowledge two months ago, when they visited St. Lucia under the “Students Engaging the CSME through Field Promotion” project. The young people shared their experiences with 25 peers from the Cave Hill Campus of the University of the West Indies in Barbados, who are currently in the twin-island Federation.

“Throughout this week, they will be engaging different stakeholders in St. Kitts and Nevis to see what laws are in place to facilitate the rights of individuals under the CSME,” Communication Specialist in the CSME Unit, Salas Hamilton, told SKNIS. “They’re going to be looking at goods, services, free movement of persons, [and the] right of establishment and movement of capital so some of the institutions [targeted] will be like the Eastern Caribbean Central Bank, [and] the accreditation council [in] the Ministry responsible for giving CARICOM Skills Certificate.”

Mr. Hamilton explained that St. Kitts and Nevis is the last stop under the project, which has moved 225 young adults throughout the region. Funding for the activity was received from the 9th European Development Fund (EDF) under the Caribbean Integration Support Programme.

“We expect that they (the students) will now seek employment under the CSME regime and not be limited to their country [or] staying in their country and trade across borders with the laws we have in place,” he stated, noting that public education programmes targeting farmers, rural community residents, labour stakeholders and media personnel are also in place.

“There are many other projects we have to roll out in the upcoming 12 months and we expect of course that St. Kitts and Nevis will participate, as it always does.”

Mr. Hamilton assured CARICOM nationals that while some Heads of Government may have differing views on areas of CSME that need tightening; all of them are in agreement that the region is better served when there is a united front.

“I will not say that CARICOM members are in any way disagreeing in the path towards regional integration along the CSME,” he concluded.