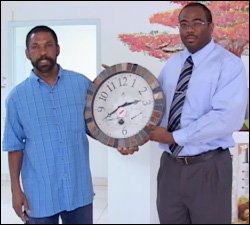 The corridors and rooms of the Pogson Medical Center in Sandy Point will be outfitted with a number of special clocks that were donated by expatriates living in the United States.

Vince DeSuza, President of the Sandy Pointers and Friends Association of New York, was on hand to present a shipment of a wide variety of clocks to the medical institution at a brief ceremony on Tuesday.

He noted that donations from his group are typically made to the education sector. However, members of the group felt compelled to give back to the Sandy Point community, and he reached out to ascertain where assistance can be offered. The feedback pointed to a need for more clocks at the new medical facility.

“Thank you very much Mr. DeSuza. “¦ I greatly appreciate this donation “¦ which I think was greatly needed in our facility, he said. “As we know, in the hospital, timing is everything and so today we can’t be more thankful.”

The Ministry of Health’s Administrative Officer, Clifford Griffin, told SKNIS that an open invitation exists for persons/agencies to contribute to healthcare facilities. He commended the Sandy Pointers and Friends of New York Association for giving back to the community and encouraged interested contributors to make contact with the Ministry of Health to facilitate such.