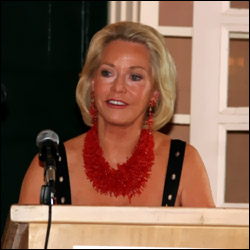 Premier of Nevis and Minister of Finance in the Nevis Island Administration Hon. Joseph Parry received commendations from United States Ambassador to Barbados and the Eastern Caribbean Her Excellency Mrs. Mary Ourisman, for having launched the landmark Nevis Investment Promotion Agency (NIPA).

During a ceremony to mark the occasion at the Old Manor Hotel on May 21, 2008, the Ambassador expressed that view that the new agency would enable the government promote and to coordinate investments.

“I wish to congratulate you Premier Parry on this launch of the Nevis Investment Promotion Agency. This new body will enable your island’s Administration to better promote and to coordinate investments and to create economic opportunities for all of your citizens,” she said.

Mrs. Ourisman noted that the new measures to encourage investment on the island coupled with its new found renewable energy resources would propel Nevis into a new era of prosperity.

“I believe that your newly discovered alternative energy resources in the form of geothermal energy, combined with your strong push to open Nevis to high quality foreign investment, will combine to create a new era, a new era of economic growth and job opportunities for all Nevisians,” she said.

The Ambassador described the occasion as one of importance because it had become clear that over the years that the focus of development across the region had moved away from the traditional sectors and had become increasingly focused on international competitiveness and the attraction of foreign investment.

She said St. Kitts and Nevis had been an important regional leader for having charted that bold new course and explained that the measures put in place could only serve to enjoy the benefits of the global trade system.

“Saint Kitts and Nevis in fact has been an important regional leader in charting that bold new course that ranks 85, quite impressive! In these circumstances, one of the primary challenges which policy decision makers, entrepreneurs and managers face is to device mechanisms that stimulate economic growth, improved productivity and provide employment opportunities to their citizens.

“Only through such measures can we make a small island with such a small island economy such as St. Kitts and Nevis to be full participants and enjoy the benefits of the global trade system,” she said.

Mrs. Ourisman said Nevis native son and the USA’s Founding father Alexander Hamilton would have been proud of the steps that the island had taken

“Your native son and our founding father Alexander Hamilton would be very proud for what Nevis has done. Not only was he the principal architect for responsible for designing the tenets of the Constitution of the United States of America but as our First Secretary of the Treasury he argued that if a nation was to grow and prosper, its credit must be sound to encourage both foreign and domestic investment. How many years ago was that? It still holds true today,” she said.

The Ambassador said too that she was proud that her Embassy and in particular USAid through the Caribbean Open Trade Support Project had been such an effective partner to NIA in the improvement of its investment profile.

She explained that USAid had worked very hard with Nevis to press forward the initiative and the Organisation had focused on supporting the adoption of legislation to remove administrative bottle necks.

“They have worked with St. Kitts and Nevis Customs and Exercise Department to streamline procedures to reduce the beaucracy and ultimately to speed up the clearance of goods that are imported into Nevis,” she said.