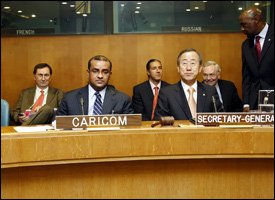 CARICOM Members At The United Nations

United Nations Secretary General His Excellency Ban Ki Moon  has promised help to the Caribbean in tackling climate change and the growing threat of organized transnational crime in the region.

“You are helping to advance our agenda. We saw that clearly at this week’s summit on climate change, and the General Assembly’s general debate. CARICOM has a great stake in realizing our common goals. Your region has been especially hard-hit by climate change and the global financial crisis. The world needs to hear from you. The United Nations is committed to working with you to respond to these and other challenges. I hope we can use this mini-summit to help chart the way forward,” said Mr. Ban.

He said CARICOM has shown exemplary leadership on the issue of climate change and understands the dangers faced by small island developing States.

“For some Caribbean countries, your very existence is threatened. Despite these difficulties, you are taking the path of cooperation. Your common regional approach is a model for others,” said the UN Chief, who promised that CARICOM members will play a key role as the negotiations continue.

He said he welcomes the proposals put forward, especially on the conservation of forests and the protection of marine resources and the Alliance of Small Island States Declaration adopted on Monday was an important step.

The UN Secretary General said the Summit brought everyone to the table in a way that only the United Nations can.

“We saw serious dialogue between the major world economies and the most vulnerable ones. The issue of financing, which is crucial for achieving a final deal, took centre stage. Now it is up to national leaders to demonstrate global leadership. I will count on you to continue playing this constructive role so that we can seal a deal in Copenhagen,” said Mr. Ban, who added that he was well aware of the heavy toll the global economic crisis is taking on Caribbean countries with high oil prices, reduced remittances, a severely depressed tourism and a slowdown in foreign direct investment.

“There is talk of recovery -““ but the impact of the crisis could reverberate for years. Your economies are more fragile than many others,” said Mr. Ban, who noted the call made last June at the United Nations Conference on the Financial Crisis for comprehensive reform of the international economic architecture.

“I know, as well, that you have been disappointed with the agreements reached by the G-20. Yesterday in Pittsburgh, I advocated again for the G-20 to uphold its past pledges of assistance and reform. I remain committed to mobilizing the entire United Nations system for initiatives that will help your region and all others: food security, trade, disaster risk management, a greener economy and the Global Jobs Pact,” said Mr. Ban.

The United Nations Chief said he also share the Caribbean’s concern about the growing threat of organized transnational crime in the region.

“I am deeply disturbed by reports that the Caribbean has the highest per capita murder rate in the world. It is time to step up our response to this threat. I welcome the cooperation between CARICOM and the United Nations Office on Drugs and Crime. We will provide all the expertise we can to help the Caribbean to fight and overcome this problem,” said Mr. Ban.

On the matter of Haiti, the UN official said the United Nations is fully engaged and donors are offering support.

Expressing hope about the prospects in Haiti, he said CARICOM’s help can make a difference, for example by including Haiti in commercial, educational and cultural exchanges and serving as a forum for addressing issues that affect Haiti’s security.

“Together, we can help Haiti to achieve the lasting stability and prosperity that its people deserve. CARICOM has important contributions to make across our agenda,” said the United Nations Secretary General.