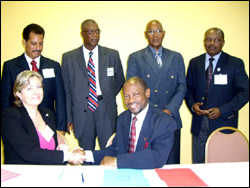 The United Kingdom Department of International Development (DFID) is pumping US$1.2 million into the Pan-Caribbean Partnership against HIV and AIDS (PANCAP).

The Memorandum of Understanding was signed on Wednesday between St. Kitts and Nevis Prime Minister Hon. Dr. Denzil L. Douglas and the United Kingdom Department for International Development (DFID) Representative, Jane Armstrong, during the Opening Ceremony of the 10th Meeting of the Regional Coordinating Mechanism of the Pan-Caribbean Partnership against HIV and AIDS (PANCAP) at the Royal St. Kitts Hotel and Casino.

“This contribution by DFID represents the first practical commitment to the principle of pooled funding that PANCAP has advocated for some time now; and we applaud DFID for this pioneering effort,” said Prime Minister Douglas when he delivered the feature address.

“This support was pivotal in the successful implementation of the first Caribbean Regional Strategic Framework on HIV and AIDS (2001-2006) and for this the citizens of the wider Caribbean will remain forever in their collective debt,” said Prime Minister Douglas, who recalled that one month go, the CARICOM Secretariat acting for and on behalf PANCAP signed a grant agreement with the Federal Republic of Germany for an amount of 3 million euros to continue a social marketing programme in Haiti, Dominican Republic, Jamaica, Belize and the OECS countries.

“I use this opportunity to applaud the German government once again for its generous support to the regional HIV and AIDS response,” said Dr. Douglas.

He said Caribbean leaders are “very delighted by the recent announcement coming out of Washington, DC, that fourteen Caribbean nations will be added to the list of countries that will benefit from a resource-enhanced United States President’s Emergency Plan for AIDS Relief (PEPFAR).

“As you will be aware, this is a platform that has been aggressively pursued by the Heads of Government of the region and we thank our friends and supporters in the United States Congress wholeheartedly for their decision in our favour. We now await the details of this tremendous vote of confidence for the work that is being done in the region,” said Dr. Douglas.

He also reported that coming hard on the heels of the US announcement, was a publication of a funding opportunity made to PANCAP by the United States Department of Health and Human Services Centers for Disease Control in the amount of US$2.5 million over the next five years.

“These funds will be directed towards enhancing the coordination and harmonisation of HIV and AIDS activities in the Caribbean and we expect that the first tranche of US$500,000 will become available by 1 August 2008,” Prime Minister Douglas disclosed.

Dr. Douglas paid tribute to work done by the staff of the CARICOM Secretariat and the PANCAP Coordinating Unit in advancing the regional fight against HIV and AIDS.

“Their commitment has been phenomenal and we owe then a debt of gratitude,” said Dr. Douglas.