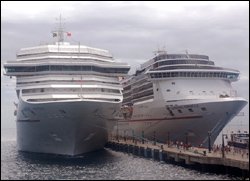 For the first time this month, two sister ships with a total of 5,100 passengers and 1958 crew are visiting St. Kitts.

Most of the passengers came ashore and went on sightseeing tours via taxis, the Scenic Railway and tour buses to Brimstone Hill Fortress National Park, Romney Manor, Caribelle Batik, the National Museum, as well as snorkeling, sun and sea bathing at the island’s best beaches, sailing, hiking and shopping for souvenirs.

Cruise tourism pumped US$44 million or EC$118 million into the St. Kitts and Nevis economy during the 2008/2009 cruise year.

Prime Minister and Minister of Tourism, Hon. Dr. Denzil L. Douglas, said it was evident that his administration took the right decision to close the debt-ridden sugar industry in 2005.

The survey-based analysis of the impacts of passenger, crew and cruise line spending was carried out by the Florida-Caribbean Cruise Association, on the 26 cruise destinations during the period May 2008 through April 2009.

While St. Kitts and Nevis generated US$44 million from cruise tourism, other destinations like Acapulco received US$21 million; Cartagena ( US$24 million); Costa Rica (US$26 million); Curacao (US$39 million); Dominica (US$14.1 million; Dominican Republic  (US$23 million); Grenada (US$21 million); St. Vincent and the Grenadines (US$7 million); Trinidad and Tobago (US$2.9 million) and the Turks and Caicos Islands (US$25 million)