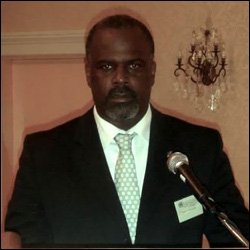 Premier of the Turks and Caicos Islands, the Hon. Galmo Williams has called for a referendum to be taken or a general poll held before the United Kingdom Government proceed to suspend the territory’s constitution and impose direct rule from London later this month.

Addressing the Caribbean Regional Seminar for the United Nations Second International Decade for the Eradication of Colonialism in St. Kitts on Tuesday, Mr. Williams, who assumed the Premiership in February told delegates that the action of the British Government is draconian and has dealt a severe blow to achieving the goal of preparing its colonies and its people to determine their own destiny.

Recalling the statement by then British Foreign Secretary, Robin Cook in 1998 that the democratically-elected governments of the Dependent Territories have the right to govern and to be consulted by Britain on any constitutional changes, Mr. Williams told delegates:

Mr. Williams said he assumed the post in February following the resignation of former Premier Hon. Michael Misick “at a critical time in our Island’s and the world’s history and a crucial time in the relationship between Britain and the Turks and Caicos Islands.”

“My years of experience as a politician and businessman, has equipped me well to provide the strong, mature leadership that is necessary to guide our country through the political, economic, and social issues that the country is currently facing. It is going to be a tough challenge, but it is one that I embrace,” Premier Williams said.

He noted that the chief objective of the 1999 White Paper was to modernise the relationship between the Turks and Caicos Islands and the United Kingdom.

“It is against this backdrop and in keeping with a modern relationship that we submit that the democratically elected government should not be displaced; the will of the people should not be silenced. This is not modernization,” said Premier Williams.

He said his Government and himself have not sat quietly on the decisions being debated and made in the United Kingdom Parliament as it relates to the welfare of his country, where persons can govern themselves and have proven to be effective in doing so for many years without fear or favor in the process.

“Today when we look at the development that has occurred in the Turks and Caicos Islands, it is questionable whether it would have occurred with members of Her Majesty’s Government at the helm or its British appointed Governor in the islands. We are the ones in the region who know our history, our dreams and aspirations.  We are the ones who have dreams for our children and grandchildren,” said the Premier, adding:

“Under the Declaration of 1960 that began this movement and the reason why we are here today, it stated that “All peoples have the right to self-determination; by virtue of that right they freely determine their political status and freely pursue their economic, social and cultural development. I believe that it is only us who can bring the development, advancement and change needed in our own countries.  It is we in the final analysis that should determine our destiny not anyone from the outside looking in,” said Premier Williams.

He said that the Turks and Caicos Islands is aware of the challenges and opportunities faced politically.

“Our country has grown significantly and there has been a continued need to ensure good governance in our chain of islands.  Therefore, my government has recently passed legislation referred to as the Integrity Commission, which now strengthens accountability and transparency not only of elected officials but also those at senior levels in the civil service.  We must be accountable to our people, ourselves and to the positions that we hold in office,” said the Premier.

He said that with the support of the United Nations, the Turks and Caicos Islands will work to ensure that elections are continued to be free and fair and commended the organisation for being at the forefront of this important issue that protects democracy around the world.

“The decolonization process in itself presents challenges to us on how we enhance the lives of our people through opportunity and academic innovation.  We have worked hard in the Turks and Caicos Islands to create social empowerment and change for our people.   Today, my government has made significant investments in education and healthcare, two fundamentals in the growth of any small developing country, with just under 1000 students awarded tertiary level scholarship and two brand new hospitals, these are some of the major projects that my government is most proud of and sees as progress towards full self-governance,” said Premier Williams.

He pointed out that the keystone to any successful society is a trained and educated work force with access to proper healthcare facilities for all.

“There are some big challenges that we face, such as how do we maintain these programmes and institutions without placing a bigger burden on our people.  But the opportunities in the decolonization process are boundless because of the groundwork we have laid.  We have opened new doors for our people by providing access to education and healthcare as I mentioned earlier but there is also more to be done.  My government is committed to achieving the self – governance for our country in the face of adversity,” said Premier Williams.

“My country might be challenged in its current state but I call upon all of you to make representations to HMG on the behalf of the Turks and Caicos Islands and its people.  We have a democracy that is still alive and a government that is capable of running the affairs of the country.  There is no need to resort to old colonial behavior when there are better alternatives that will not erase our democracy,” Premier Williams urged the delegates to the Seminar at the St. Kitts Marriott Resort and Royal Beach Casino.