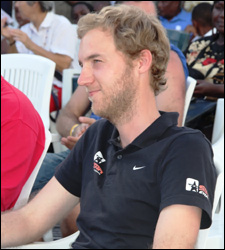 Residents of Nevis were, last Thursday [March 31] during the opening ceremony for TRISTAR 111 Nevis’ International Triathlon 2011, applauded for their “warm hospitality.”

TRISTAR Representative Mr. Ben Hoehler, during his remarks, described the 36 square mile destination as “an island rich in culture and tradition” as he spoke of the time spent on Nevis.

“We found an island with so many beautiful spots to spend time on and we found a welcome from the people of Nevis that I personally had never seen before. This is something that makes Nevis special, that makes Nevis unique and we want to thank you very much for welcoming us in this way,” he said, adding that the “warm hospitality” was “the strongest impression that he will take home.”

Mr. Hoehler, joined by international and regional triathletes, journeyed to Nevis, last week, to participate in the first TRISTAR event in the Caribbean.

Nevis, he said, was chosen as the host country because it represented the three elements his organisation had been searching for.

“It’s focused on fun, people go home with a special experience [and] it’s bringing different people together [however], Nevis offers more than this. Coming from Europe and for the first time in the Caribbean, you have a certain idea: a certain image in your mind that when you come to the Caribbean area you’ll have the beaches, the sun, the blue sky, the sea and to relax and have a good time and all this we found in Nevis but we found much more,” Mr. Hoehler said.

The ceremony was held outside the Arthur Evelyn Building and attended by members of the Nevis Island Administration’s Cabinet.