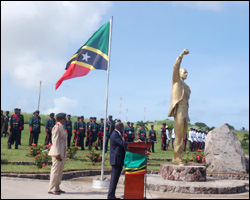 St. Kitts and Nevis paid homage to its three National Heroes with a wreath laying ceremony at the Robert L. Bradshaw Memorial Park.

He noted that the men and women who serve this blessed land as members of his Cabinet and as high ranking Government Officials, would not be in the positions they now hold.

“The many architects, engineers, doctors, lawyers, and other professionals of humble origins would not be flourishing throughout these blessed islands of ours. We, as a people, would not have achieved Independence when we did.  And the rapid and unprecedented delivery of such advances as the right of every man and woman to vote, the right of every child to a secondary education, the right to a dignified old age with the assistance of social security, and the many other advances that are today ours, would never have come to us when they did,” said Prime Minister Douglas.

“Why did I, in referring to Messrs. Bradshaw, Southwell, and France make reference to them before they became elected officials? I did this because these honourable gentlemen did not achieve stature, status, respect, and acclaim as a result of being elected to office.  To the contrary, their commitment to us and their commitment to our futures ““ a future they knew they would not live to see ““ long before they were ever elected to anything by anyone, gave them all the stature, all the status, all the respect, and all the acclaim that anyone could ever hope for. That, Ladies and Gentlemen, is the mark of true greatness,” said Dr. Douglas.