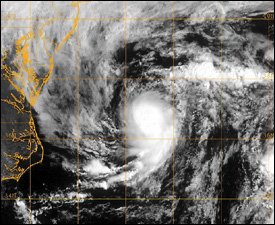 The 2009 Atlantic hurricane season is an event in the annual cycle of tropical cyclone formation. The season officially started on June 1 and will end on November 30. These dates conventionally delimit the period of each year when most tropical cyclones form in the Atlantic basin. However, for the third straight year, the season started early when Tropical Depression One formed on May 28.

On May 28, the National Hurricane Center began issuing advisories on Tropical Depression One. The depression had formed about 400 miles (640 km) east-northeast of the Outer Banks of North Carolina. With relatively favorable conditions, the depression was forecast to strengthen into a tropical storm by early May 29 before dissipating over cooler waters shortly thereafter. However, the storm system did not reach tropical storm strength, and instead began to rapidly weaken later on the 29th. The depression became extratropical at about 5 p.m. AST (2100 UTC) that same day, and was absorbed by a frontal zone shortly thereafter.

Forecasts of hurricane activity are issued before each hurricane season by noted hurricane experts Philip J. Klotzbach, William M. Gray, and their associates at Colorado State University; and separately by NOAA forecasters.

Klotzbach’s team (formerly led by Gray) defined the average number of storms per season (1950 to 2000) as 9.6 tropical storms, 5.9 hurricanes, 2.3 major hurricanes (storms reaching at least Category 3 strength in the Saffir-Simpson Hurricane Scale) and ACE Index 96.1. NOAA define a season as above-normal, near-normal or below-normal by a combination of the number of named storms, the number reaching hurricane strength, the number reaching major hurricane strength and ACE Index.

The following names will be used for named storms that form in the North Atlantic in 2009. Retired names, if any, will be announced by the World Meteorological Organization in the spring of 2010. The names not retired from this list will be used again in the 2015 season. Names that were not used are marked in gray, and names in bold are storms currently active. This is the same list used in the 2003 season with the exception of Fred, Ida, and Joaquin, which replaced Fabian, Isabel, and Juan respectively. If there are more than 21 named storms (the 21st being Wanda) then any more tropical storm-strength systems will be named with the Greek alphabet, starting with Alpha. This has only occurred once, in 2005.