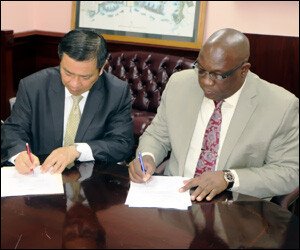 The Government of Taiwan has donated two checks to St. Kitts – Nevis, one of over EC$800,000 to aid anti-criminal activities and another of over EC$19,000 to mitigate disasters due to climate change were handed over to Dr. the Honourable Timothy Harris, Prime Minister of St. Kitts and Nevis, at Government Headquarters, on Monday, October 12.

“The contribution is in support of our crime fighting activities and in particular to strengthen the capacity and the capability of the police to deliver law and order,” said Dr. Harris, adding that the Government will “spare no effort and will leave no stone upturned” for the peace and security of the Federation.

“Given the importance of the strong response of the police, and in fact law enforcement agencies in the context of the criminal activities which are taking place, we are heartened by this special donation,” said Prime Minister Harris. “We will use these resources to ensure that we have, for a longer period, the expertise, experience and support of some crime fighting, law enforcement officers from the United Kingdom, in particular the Bramshill Police Advisers.”

Dr. Harris noted that the advisers have been in the Federation working on several assignments and have done a good job in training, mentoring and in providing investigative support in solving crimes and homicides in particular.

Prime Minister Harris openly thanked the Government and people of Taiwan for the contribution, adding that additional support such as vehicles and other equipment are expected. This, he said, would be helpful to the law enforcement officers in fulfilling their mandate to serve and to protect citizens and residents.

His Excellency George Gow Wei Chiou, Taiwan’s Resident Ambassador to St. Kitts and Nevis, praised the Prime Minister and his government’s efforts to combat crime, adding that in order to stop the continued existence of crimes and homicides, the prime minister has worked with the police to develop a six point plan to mitigate the crime situation in St. Kitts and Nevis.

“As St. Kitts and Nevis work strenuously to secure safety and security for her citizens, Taiwan has been lockstep with the Federation in their endeavor,” said Ambassador Chiou. We are pleased with the way the six-point plan is unfolding and effectively implemented. The security infrastructure has been bolstered with the new equipment being introduced to police.”

With respect to climate change, Prime Minister Harris mentioned that Taiwan has been helpful in sponsoring participation in a number of events, and as such, made an appeal to the International Community at the United Nations for Taiwan’s inclusion.

“At the recently concluded UN meeting, I made a special plea for the International Community to ensure that Taiwan is included in the conversations in the international discourse relating to climate change and alternative issues,” he said, adding that Taiwan’s rank in the top 20 largest countries by way of Gross Domestic Profit (GDP) and Per Capital GDP statistics is a significant indication of its power and strength.

Just as recent as last week, a private company out of Taiwan donated a number of wheelchairs to community-based health services in St. Kitts and Nevis. Taiwan also donated over EC$500,000 for the refurbishment of the National Information and Communication Technology Center located at the C.A Paul Southwell Industrial Park on Friday, October 9.