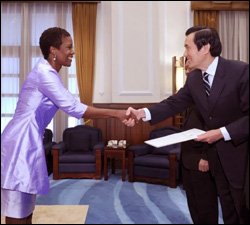 President of the Republic of China on Taiwan, His Excellency Ma Ying-jeou says his government will expand its cooperation with allies if necessary.

President Ma made the comments on Monday shortly after accepting the Letters of Credence from the newly-appointed St. Kitts and Nevis Ambassador to Taipei, Her Excellency Ms. Jasmine Huggins at the Presidential Palace.

Inside the Presidential Palace, President Ma said St. Kitts and Nevis has been fully supportive of Taiwan’s bid to join the international community and added that Taiwan is grateful for its support.

Since taking office in May, 2008, President Ma said he has pushed for flexible diplomacy and ending the diplomatic battle with China.

While relations between Taiwan and China have greatly improved, President Ma also said Taiwan will continue to cooperate with its allies. Ma said Taiwan might add new cooperation projects if necessary.

St. Kitts and Nevis Embassy established an Embassy in Taiwan in 2007, when Ms. Huggins was appointed Charge D’ Affaires.

“I shall endeavor to vigorously pursue the educational opportunities that exist in the Republic of China for the youths of the federation wishing to further their studies,” she pledged.

“Our people-to-people exchanges, whether political, cultural or educational, can only serve to foster understanding, engender respect and build lasting relationships that would serve us in good stead in years to come,” said Ambassador Huggins.

Another of the ambassador’s stated priorities is to promote her country as a competitive market for investment opportunities in areas such as tourism, light manufacturing, information technology and agriculture.