The track and field programme in St. Kitts and Nevis will receive a boost with the visit of two high profile sports figures that are credited in part, with the success of the Jamaican athletic development.

President of the Jamaica Amateur Athletics Association, Howard Aris and former gold medal Olympian and Commonwealth champion Donald Quarrie will visit the Federation from October 16 to 20.

“The Ministry of Sports remains committed to the development of sports and the advancement of young people through sports. The visit by these two respected gentlemen is testament to this pledge,” Director of Sports, Dave Connor told SKNIS. “The construction of the Silver Jubilee Athletic Stadium provided the infrastructure for local athletes to physically train. This week, we will take another step in addressing the mental preparedness of these athletes as the demands of international competition can be daunting at times.”

The St Kitts and Nevis sprint superstar Kim Collins delivered his fastest 100-metre run since 2005 when he captured the event at the Moscow Open in 10.10 seconds some two weeks ago in Moscow, Russia.

Collins has now followed up that spectacular and impressive victory with yet another stellar performance this time in France at the Metropole Gaz de France Athletic Meet.

Kim impressed during the men’s 100m race with a storming start and acceleration, to win with a 0.13sec margin over his closest competitor. Collins set his 3rd 10.10 time in a row, after meets in Moscow and Zukhovsky over the last two weekends.

“I’m disappointed by the time because I wish I had run under 10sec, but the weather made it difficult (wind was -0.3). I am probably in the best shape of my career, and I was happy to run in France,” said the winner of Paris 2003 World Championships, whose next race will be in Madrid. 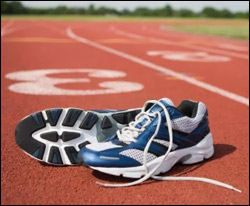 St. Kitts and Nevis’ top sprinters including Kim Collins, Virgil Hodge and Tiandra Ponteen will be among athletes contesting the June 21 and 22, track and field National Championships at the new Silver Jubilee Athletic Stadium at Bird Rock.

The two-day competition will be used as a qualifying event to select representatives for a number of upcoming track events including the July 08-13 World Junior Championships in Poland and the XXIX Olympic Games slated for August 08-24 in Beijing, China.

Odel “˜Scotty’ Hanley of the St. Kitts and Nevis Amateur Athletic Association (SKNAAA) appeared on SKNIS’ radio magazine, Perspectives, and said that this event is meaningful as it marks the first time overseas based athletes such as Collins and Hodge will compete at the Silver Jubilee Athletic Stadium since it’s opening in March.

“It’s always exciting to race in front of the home crowd,” he said, noting that it has been years since the top sprinters competed in St. Kitts. “Most of the [overseas based runners] saw the pictures and heard the reports from the CARIFTA Games and said wow I should have been home.”

Press Release From: Osdel “˜scotty’ Hanley P.R.O SKNAAA Subject: Athletes to compete at Hampton Games Date: 15th May, 2008 Three SKNAAA Athletes left the Federation today May 15, 2008 to compete in the 2008 Hampton Games in Trinidad, over the …

Collins, clocked an official time of 6.54 seconds in the 60 meter final of the World Indoor Championships in Valencia. The time earned him a share for second place along with British sprinter Dwain Chambers.

Minister Skerritt told SKNIS that he was delighted when he heard the news. He said that the Government and people of the twin-island Federation are proud of Collins for exhibiting the grit and determination typical of locals when they are chasing goals. This hinted at the injuries that sidelined the sprinter for many events in the past two years.