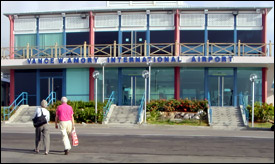 Radio show host, Hastings Daniel, welcomed the Premier of Nevis, the Honourable Joseph Parry, to the popular program, “Tell Me”, where Premier Parry discussed the upcoming runway extension of the Nevis Airport.

Premier Parry, Cabinet Secretary- Mr. Ashley Farrell and Permanent Secretary in the Ministry of Finance, Mr. Laurie Lawrence met with Prime Minister, the Hon. Dr. Denzil Douglas in St. Kitts last week, where they discussed a number of issues; the airport extension being “one of the main concerns”, according Premier Parry.

Since Premier Parry attended the World Bank meeting in Washington D.C last year and returned stating that he had received in principle the assistance for the runway extension, numerous persons have questioned the a need for airport expansion.

Premier Parry reported that he does not believe that the people of Nevis are fully aware that the American Eagle has been landing on Nevis with a number of restrictions, some being that they can not come to Nevis with a full fuel tank, after dark flights into Nevis are not allowed and the planes can not accommodate all passengers with their baggage, if the flight is full.

Last year, during a World Bank meeting in Washington D. C., the Premier of Nevis met with Kuwaiti officials and discussed the possibility of securing assistance from the Kuwaiti Government.

Flying to Nevis via American Airlines just got a lot more expensive! Updated American Airlines Checked Bag Policies Know before you go! Customers who purchase domestic economy class tickets on or after May 12, 2008 but before June 15, 2008 …

Delta Airlines Flights To St. Kitts Nevis  Charlestown, Nevis April 16, 2008  Got this in my email today from Delta Airlines / Northwest Airlines.  Due to the “hopefully” upcoming merger between these two airlines, getting to Nevis will be easier …