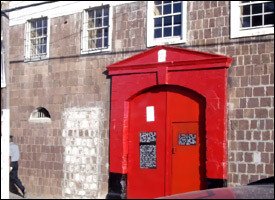 St. Kitts Prison With Hanging Order On The Door Photo By Erasmus Williams Basseterre, St. Kitts – Nevis February 07, 2011 (CUOPM) The Government of St. Kitts and Nevis has told the Tenth Session of the Working Group on the … 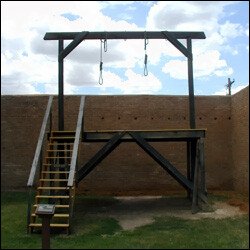 British Readers Speak Out On St. Kitts Hanging Basseterre, St. Kitts – Nevis January 12, 2009 (CUOPM) A British newspaper report on the recent court-ordered hanging of a convicted killer has resulted in deafening support of the death penalty from …

St Kitts and Nevis: Execution Is A Shameless Act

Amnesty International considers the execution of Charles Elroy Laplace carried out in St. Kitts and Nevis on Friday 19th December as a shameless human rights development for the country after 10 years of moratorium.

Amnesty International understands concerns about the upsurge of crime and murders in the country. However, the organization strongly believes that the use of the death penalty, as well as constituting cruel, inhuman and degrading punishment, is not an effective method for preventing crime.

Given the unlikelihood of ever being brought before the courts, it is quite implausible that before committing a crime a criminal would consider the risk of being hung and would refrain from wrong-doing. The death penalty also runs the risk of irrevocable error.

Protection of citizens does not come from executing criminals but from preventing them from committing crimes. Amnesty International therefore believes that the true solution to the deteriorating crime situation lies with the strengthening of police capacities. The proper functioning of the justice system is also crucial to ensure compensation to victims but such compensation cannot come from claiming the life of the wrong-doer.

The world is turning away from the use of death penalty. Before last Friday’s execution, since 2003, the United States has been the only country in the Americas to carry out executions, even in the USA there has been a dramatic decrease in the number of executions in recent years. One hundred and thirty seven countries have now abolished the death penalty in law or practice and only 24 nations carried out executions in 2007. Huge swathes of the world are now free from executions.

Amnesty International appeals to the St Kitts and Nevis authorities to send a strong message to the world and to the other Caribbean countries by stopping the executions and commuting the sentences of all other prisoners waiting on death row.