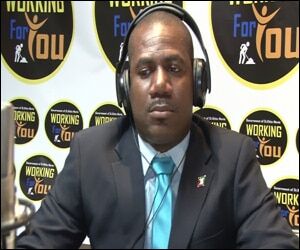 St. Kitts and Nevis Deputy Prime Minister, Honourable Shawn Richards, says that upon becoming the Minister of Education, his first priority, concerning resolving the Basseterre High School (BHS) issue, has been the students and teachers.

“The first priority of the government was ensuring that the students are comfortably housed elsewhere, and we spent some $5 million to do so,” Deputy Prime Minister Richards said.  “That I think has been more important to the students and the teachers than anything else.”

He said this on the government radio programme “Working For You” on February 17.  This edition also formed part of the week of activities marking the first anniversary of the Government of National Unity’s election to office.  As such, callers showered the government and the deputy prime minister with many congratulatory wishes.

One caller expressed a desire for the destruction of the building on the previous site of the BHS.

“To tear down that compound, there is a cost attached to it,” the deputy prime minister said.  “But even without the cost, that is attached to it, let us also recognize that we have not had any report thus far, that has been conclusive as to what has been causing the illnesses which were being experienced by the teachers and students at the BHS.”

The Education Minister further noted that the Government would make a decision after more conclusive reports.

“Now it perhaps means that maybe some further testing would be done because at some point in time a decision has to be made relative to the usage of that particular area, in whatever capacity is so determined,” Minister Richards said. “Maybe after further testing, there might be something more conclusive, which would guide the government in a particular direction.  Whether it is you need to completely remove the buildings which are there, whether it is you have to remove some soil from there and replace it with soil.  So until those particular decisions are made, until we have some sort of report which can guide us in a particular direction, I don’t think the wisest thing, at this particular time, would be to go and pull down those buildings.”

“Let me say here that my visits to the schools were done with Mr. Carl Francis who is the Project Engineer/Manager attached to the Ministry of Education,” he said, adding that his Ministry was doing its best to ensure that all schools are properly maintained.

The Minister thanked Mr. Francis for diligently executing his duties.  He also expressed gratitude to individuals within the Ministry of Education, Youth, Sports and Culture, for the guidance, support, and work they are doing on behalf of the people of St. Kitts and Nevis.