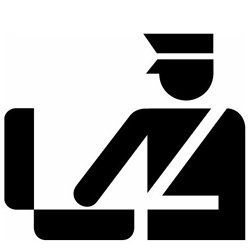 Strategy is among the many techniques being taught to Junior Customs Officers serving less than two years at the Customs and Excise Department.

Clyve Caines, one of 19 course participants, said that strategy piqued his interest.  He said he learned how to plan, prepare and execute to get what he wanted while using the law to the best of his ability.  Mr. Caines elaborated that he received tips on how to diffuse certain situations such as issues with difficult customers, while realizing that they come from different cultures and backgrounds.  He said that it was his uncle who encouraged him to become a customs officer.  The Junior Officer explained that he spent time with his uncle in the Anguilla Long Room in the Customs Department.

Evelyn Garnette, another cutoms officer in-training, said that this profession was chosen because she liked the occasional change of work environment.  She said that she was not based at one location for too long and she could be stationed at either one of the ports, the long room or the warehouse.  Ms. Garnette further noted that she would also be continuously learning the different aspects of the role of a customs officer.

Kenny Warner, one of the six participants from Nevis said that the profession of a customs officer is certainly not boring because something new is learned every day.

The course itself, he said, enlightened him about his powers and duties and he emphasized that when he returned to Nevis he would apply the information and techniques and share it with his other work colleagues.

At the completion of the eight-week course, all junior officers will be eligible for advancement in their profession.