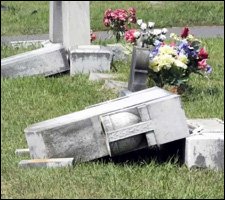 Stiffer Fines Are Being Called For

Stiffer penalties for persons who show disrespect for cemeteries in St. Kitts and Nevis.

The St. Kitts and Nevis National Assembly which meets on Thursday is being asked to approve a penalty of EC$1150 for unacceptable conduct in public cemeteries.

It is an offence to play games or sports, discharge firearms, disturb a funeral or other memorial ceremony or commit any other type on nuisance within a cemetery pursuant to section 21.

Public cemeteries are open to the public from sunrise to sunset pursuant to regulations, smoking is strictly prohibited within a cemetery and persons must conduct themselves in a quiet, orderly manner and must not stand or sit on the gravestones or enclosure walls of the cemetery and must enter or leave through the gates.

The legislation is proposing that the penalty be increased from EC$96 to EC$1150.