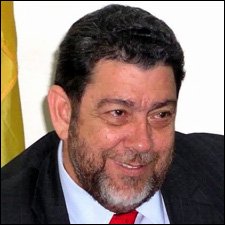 This was disclosed Thursday by the Party’s Chief Executive Officer (CEO) and General Secretary of the Labour Party, Ms. Wanda Connor.

“Prime Minister Gonsalves has accepted the invitation and the Labour Party is very honoured to have an esteemed and illustrious Caribbean leader to be our guest speaker,” said Connor.

The 62-year-old Gonsalves has been the Prime Minister of St. Vincent and the Grenadines since March 29, 2001, when his Unity Labour Party won the 2001 general elections by a landslide of 12 seats to 3, after a close run in the 1998 elections.

He was re-elected in the December 2005 elections with the same parliamentary ratio. He first entered political life as a student at the University of the West Indies at Mona, Jamaica. In 1968, as President of the Guild of Undergraduates, Gonsalves led the student protest at the banning of popular Guyanese historian and intellectual Dr. Walter Rodney.

Mr. Gonsalves received his Ph.D. in political science from UWI, Mona, and went on to receive a law degree from the University of the West Indies, Cave Hill, Barbados before returning to practice law and become an active politician in his homeland.

Over 700 delegates and dignitaries from the diplomatic and consular corps and non-governmental organisations are expected to attend the official opening ceremony at the St. Kitts Marriott Resort Ball Room.

The opening ceremony begins at 9 A.M. with the singing of the National Anthem, the Invocation and welcome and opening remarks from Labour Party Chairman and Minister of Finance, International Trade, Industry and Commerce, Dr. the Hon. Timothy Harris.

Following the remarks by Dr. Gonsalves, the presentation of the new Miss Labour 2009/2010, her runners-up and other contestants and the honouring of the mothers from the 8 constituencies on St. Kitts, Prime Minister Hon. Dr. Denzil L. Douglas, will address the Conference in his capacity as the Political Leader of the St. Kitts-Nevis Labour Party.